‘Sunset’ is a property situated along part of the South-West coastal path that passes around the small village of Oreston in Plymouth. 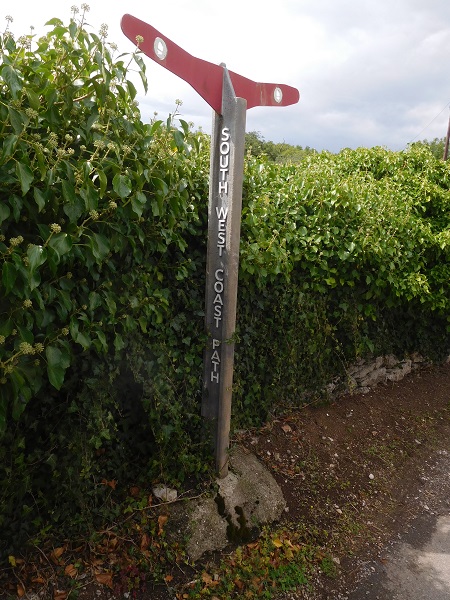 Although the bungalow was built sometime in the 1930’s, some of the boundary walls around the property were built for the Duke of Bedford during the early to mid 1800’s, and had once formed field boundaries to part of his estate in and around the nearby Radford and Hooe Lake areas. The lanes between these boundary walls at times are very narrow because in those days these ‘trackways’ had only to cope with the passage of horse and carts. These days modern vehicles have to navigate through with great caution. As a consequence a section of the boundary wall belonging to the property had been clipped by a passing vehicle and caused damage to the wall. 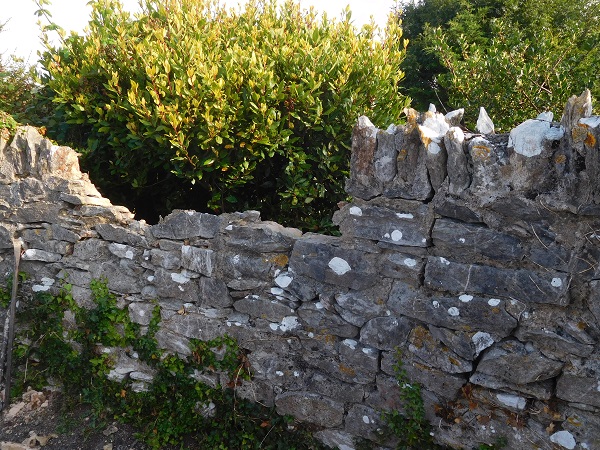 We were asked to take a look at the damaged section and although most of the wall facing the lane was still standing, the rear of the wall overlooking the property had completely collapsed into the garden and it wouldn’t be long before the rest of it collapsed entirely and our first job was to carefully take the damaged section of wall down and set aside the stone for re-use. 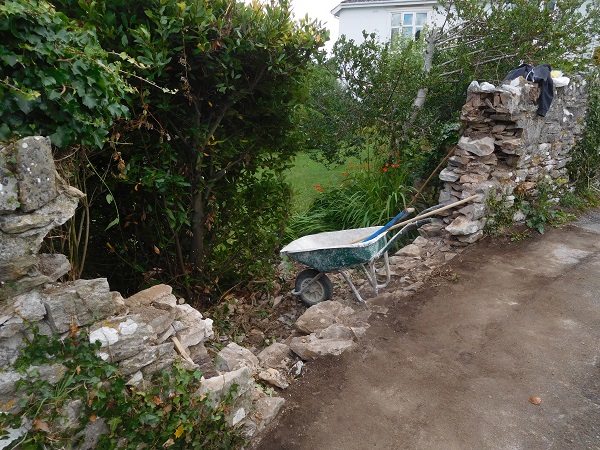 The stone we took down for re-use was placed up the lane a little from where we were working to maintain vehicular access. We had carried out work here before along this boundary wall many years ago during the 1990’s for the same client. Back then we had completely rebuilt a larger section of the wall that you can see in the image below behind the pile of stones, which overtime has matched in pretty well. 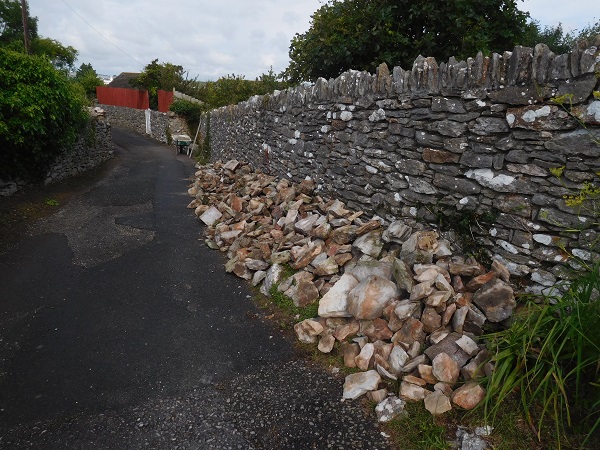 Having got everything prepared, it wasn’t long before we got the new section of stonework underway. 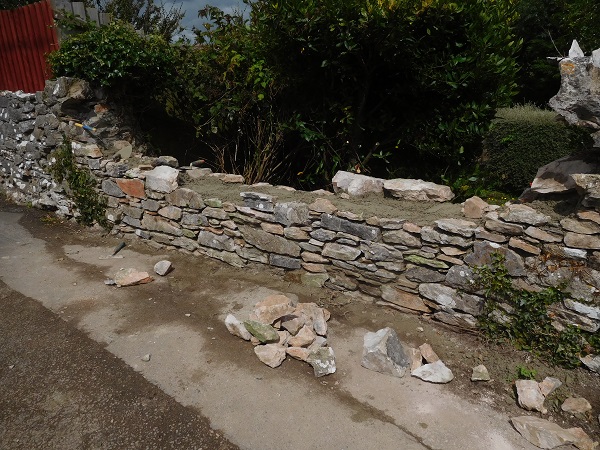 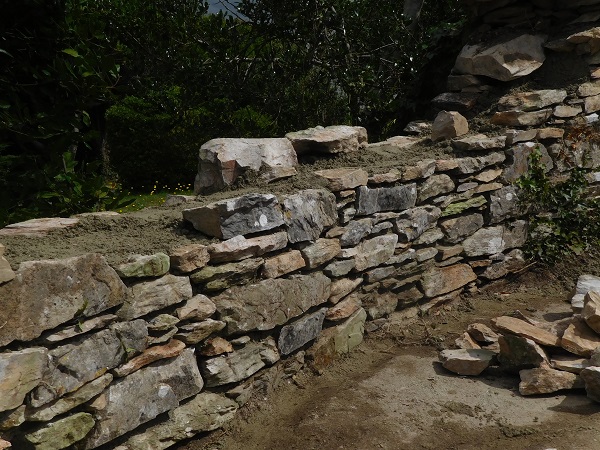 The thickness of the wall varied, at the base it started off at 18 inches (450mm) and as it got higher it gradually tapered back to about 13 inches (330mm). A traditional lime based mortar was used in the construction and the mortar was kept well back from the face of the stone to match the other sections of wall along its length. 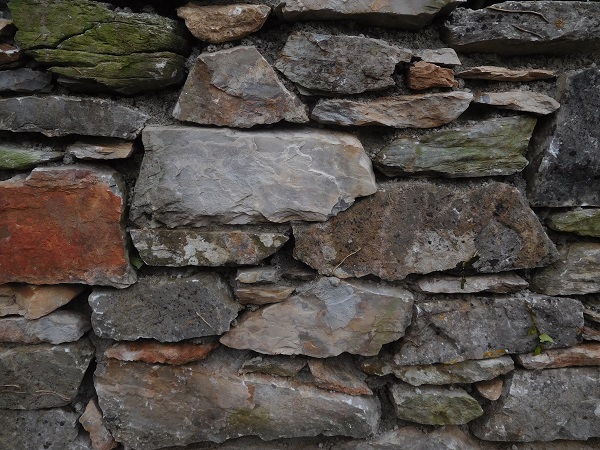 The stone we were using had originally came from the local Radford quarry which is less than a mile away. Stone here had been quarried from at least the early 1800’s but today the quarry lies abandoned after ceasing its operations in 1974. Once we had got our wall up to height it was time to start on the coping. 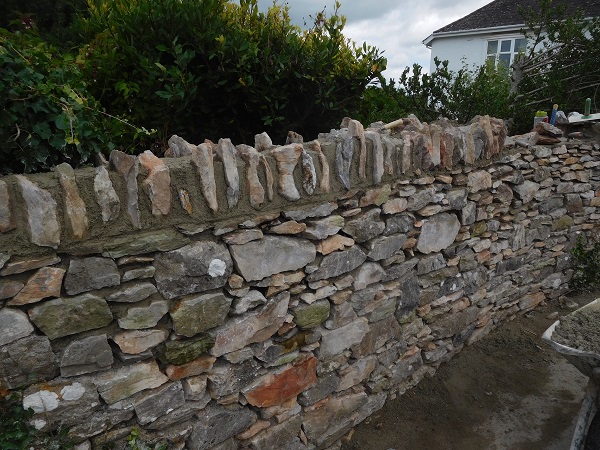 The coping consisted of stone laid upright and traditionally this feature is called ‘Cock and Hen’. 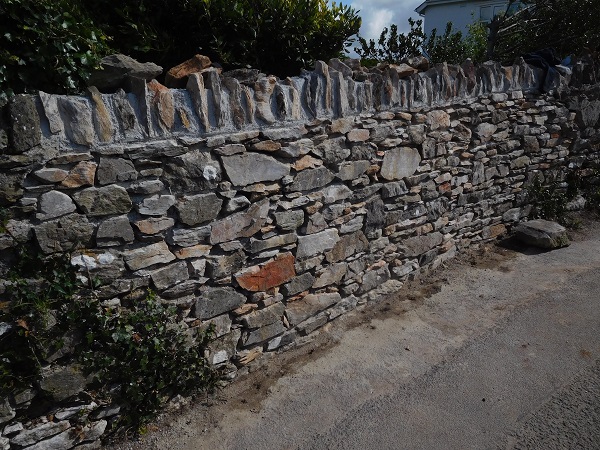 This upright feature is laid along both the front and back edges of the wall then the centre is filled in with mortar to form a solid construction and more importantly creates a good weather resistant coping. The wall actually retained part of the lane as the level of the garden behind was approximately two feet (600mm) lower.