Keynedon Barton is situated in Sherford on the outskirts of Kingsbridge in South Devon. This substantial complex of Grade II* listed buildings along with the farmhouse include a tythe barn, a linhay and threshing barns. 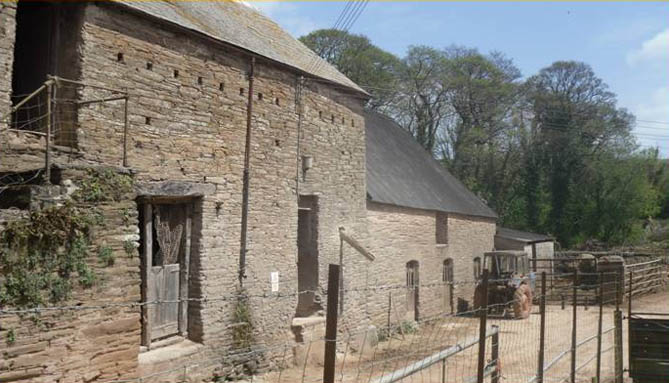 A pound house that produced cider, a range where all the cooking and day to day chores were carried out. 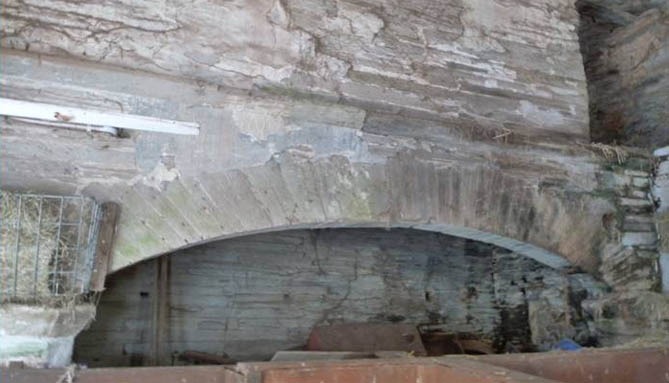 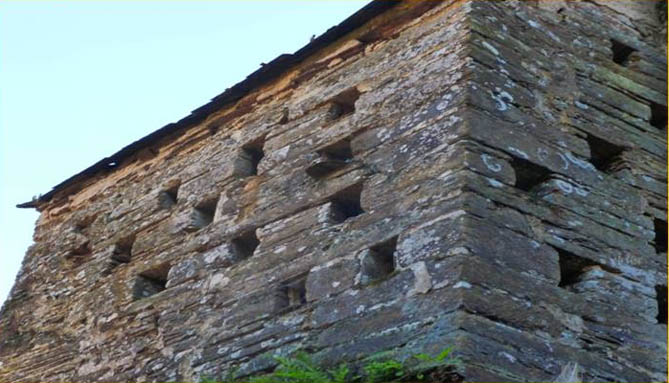 A laundry, a dairy, a roundhouse where horses were used to generate power to turn farm machinery and dovecotes are built into the walls everywhere you look. A small farm workers cottage, now in much need of repairs. 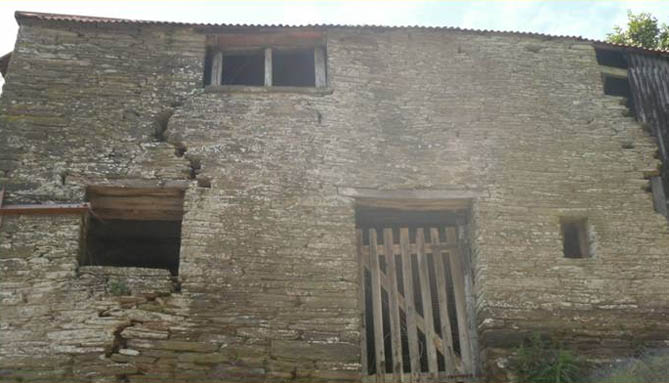 Other parts of this complex include a chapel, a brew house, latrines and even what is believed to be an old hunting lodge that overlooks a 130 acre deer park. Also situated here are the remains of what are thought to be formal gardens. 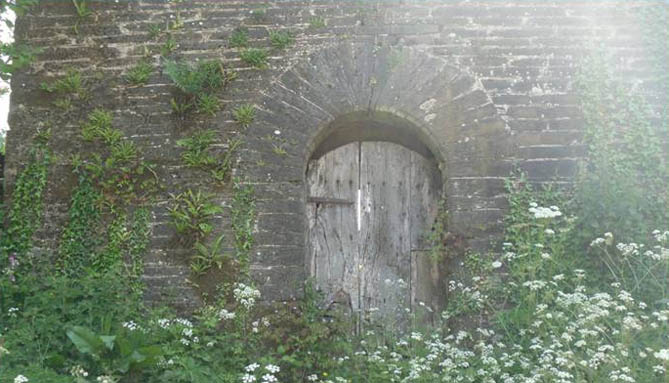 The name Sherford is first mentioned in 1018 and in those days it was known as ‘Scire-Ford‘ meaning ‘Clear Ford‘ in Anglo-Saxon. The farmhouse itself can trace its origins back to sometime during the mid 12th century or even earlier and the 340 acre farm is still in working use to this day. It is one of the oldest farmhouses in Devon. Keynedon, which is pronounced ‘Kennedon’, derives from the Old English name meaning ‘the hill of Coena’s people’. The word ‘Barton’ is historically synonymous with a feudal demesne in the English West Country, now typically meaning a large farmhouse or the manor house. Keynedon Barton is the site of the Domesday manor of Chenighedona and it is mentioned in the ‘Testa de Nevill’, the more modern version of this is known as ‘The Book Of Fees’. The ‘Testa de Nevill’ is a Medieval collection of records made between 1198 & 1292 A.D. listing feudal landholdings or ‘fees/fiefs’ held by the King or Crown. 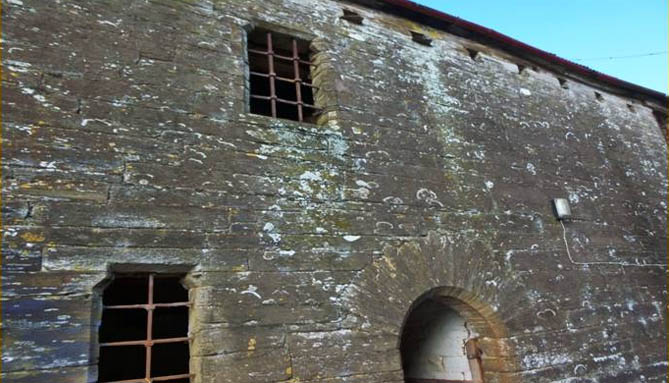 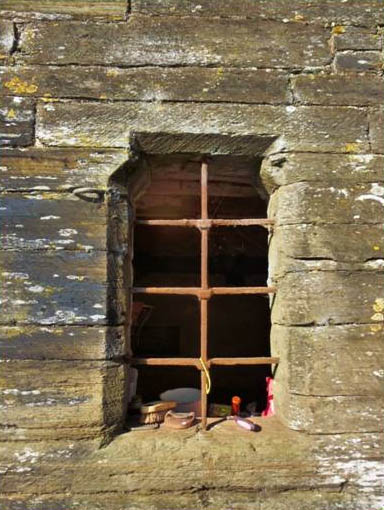 Original ‘ferramenta’ in the form of Tudor window grills still in situ. 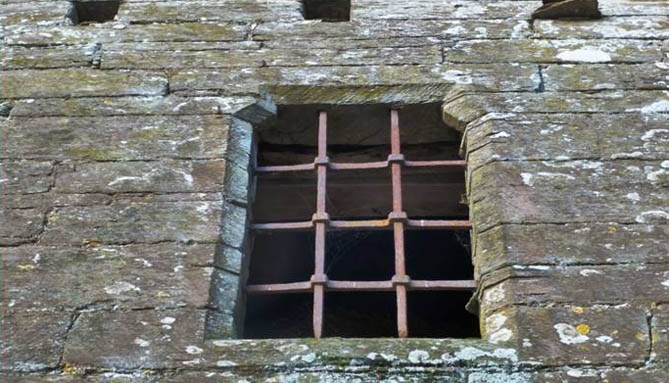 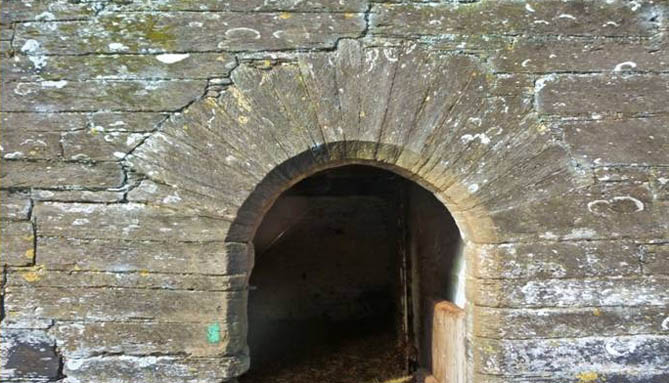 Keynedon has been well documented since the middle of the 12th century. Around the beginning of the 14th century it was owned by the Halse family up until 1684 A.D. It is this family that was responsible for many of the surviving features of the house and surrounding buildings that we see today. This was once a high status quadrangular style manor house containing mock-fortified outer walls with crenellated battlements and inner courtyards. Arched gateways or gatehouse type entrances were also built here along with towers. Much of this work was constructed using high quality slate ashlar which had all been dressed by hand using an axe and the stone came from an old quarry at the rear of the manor complex itself called Keynedon quarry. This small quarry now disused and overgrown also supplied the stone for Sherford church in the village along with roofing slates. The stone is blue/green slate and belongs to what is known as the ‘Meadfoot Group’, a series of rock strata in South Devon. These rock beds range from shale, slate, siltstone and even sandstone. 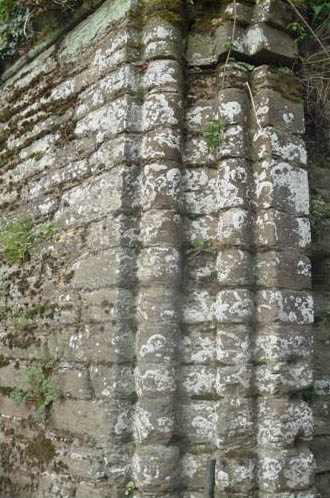 Although the remains of one arched gateways still stand the towers have long since been demolished. One of the towers was still standing up until about a century ago, and it is thought the thick walls that form the porch to the present farmhouse today are possibly from an original tower. A great deal of construction work has been carried out here over the years at different periods in time and many openings that form the doorways and windows still have the original granite jambs and lintels that date from the Tudor era, and some have even been detailed using Beer stone. 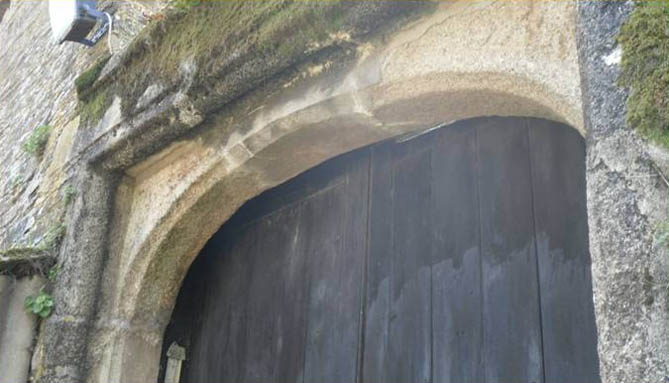 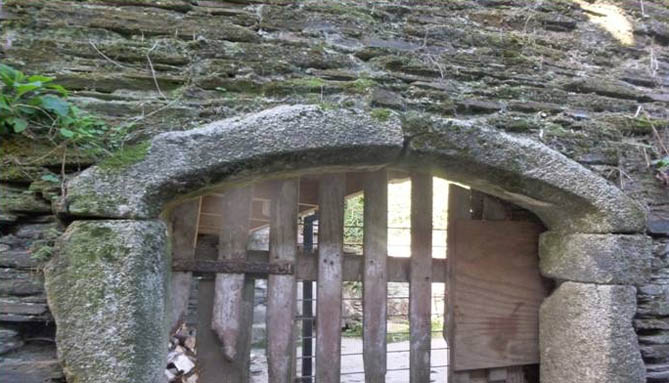 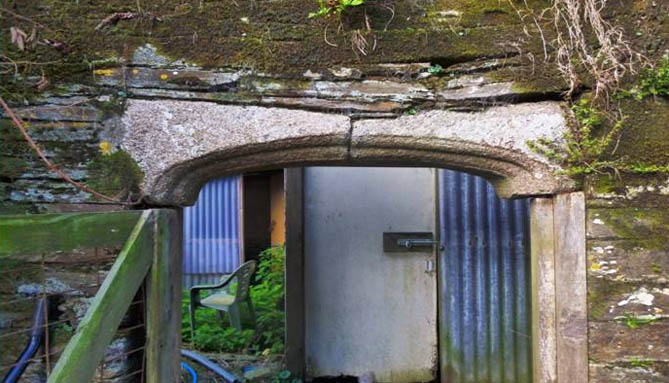 As you arrive up to the farmhouse you pass over the old causeway which was originally flanked by two large fishponds on either side. These ponds are mentioned in farm records dating from 1694. The ponds disappeared long ago but the stream that once fed the ponds still runs under the causeway. During torrential rainfall the stream burst its banks and washed away sections of walling to one of the causeway walls. Fishponds are quite common in manor complexes such as this but this water feature is unusual for the fact that it originally gave the appearance the manor house had a moat. 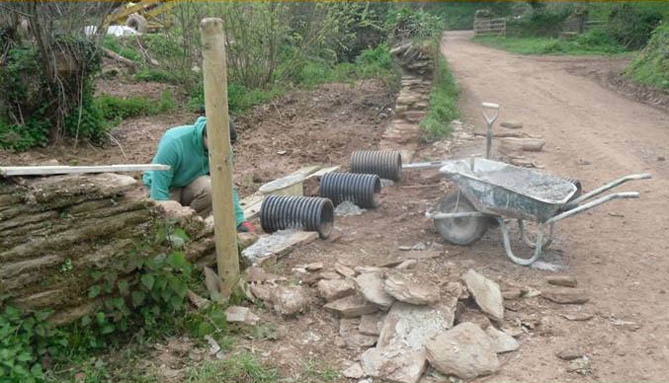 One of the first things we did was set out some drainage holes along the base of the wall should the stream bursts its banks again in the future and not put any undue pressure on the wall. 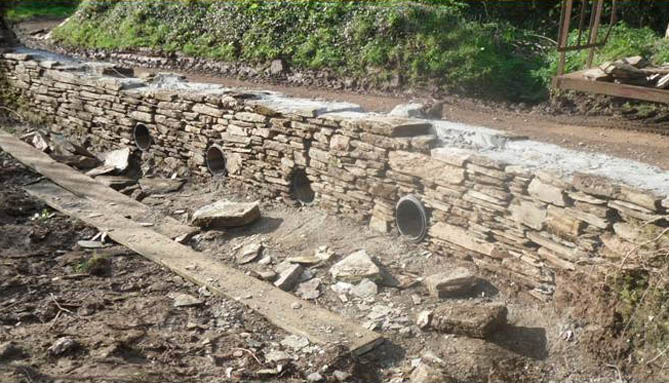 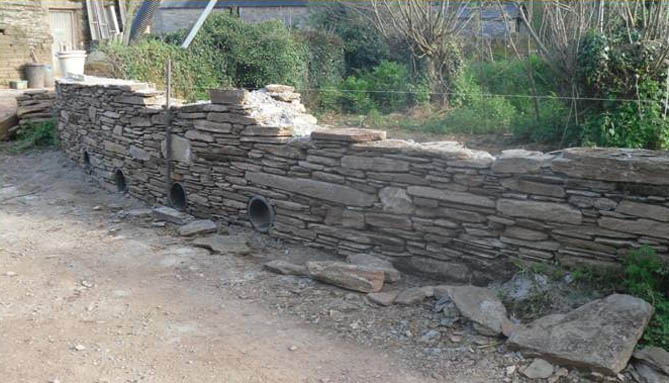 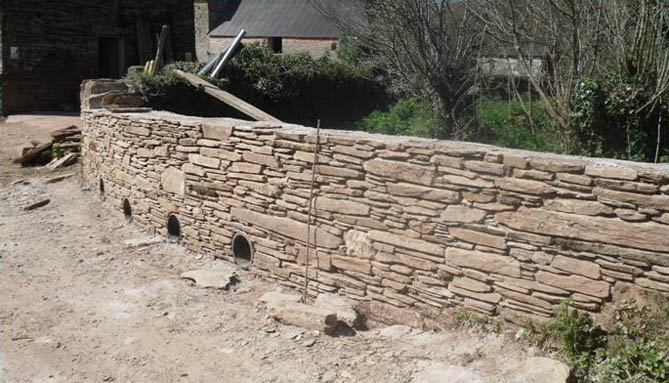 Then the sections of wall were built back up using the existing stone on site along with a traditional hydraulic lime mortar. Most of the original stone was re-used but some came from an existing stockpile on site and consisted of good quailty slate which had originally came from demolished walls and buildings that once stood here. Once the walls were built up to their original heights the coping stones were re-laid to match in with the same style that had been here for hundreds of years. 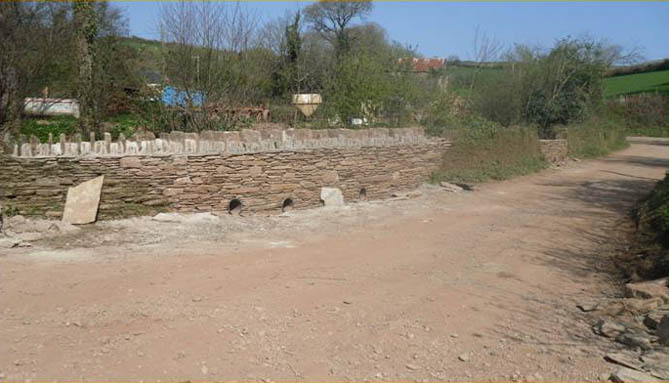 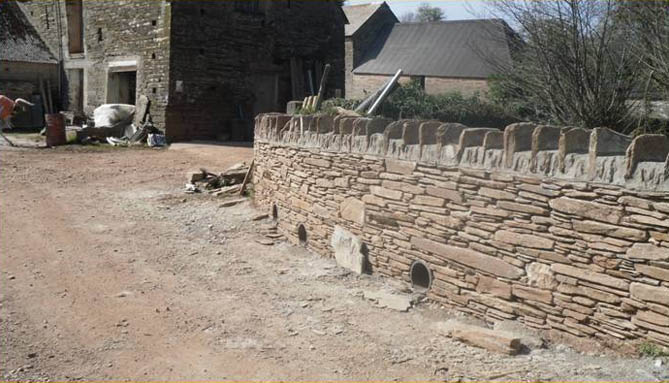 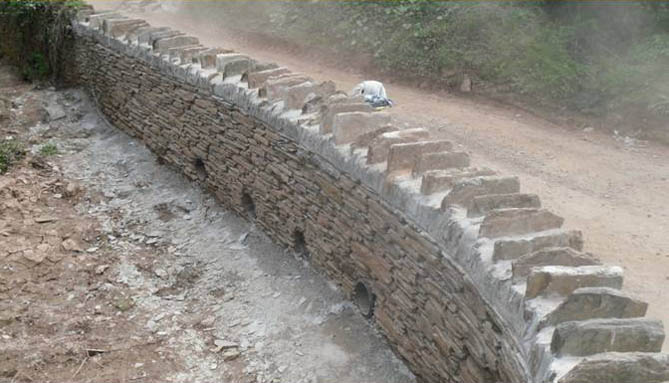 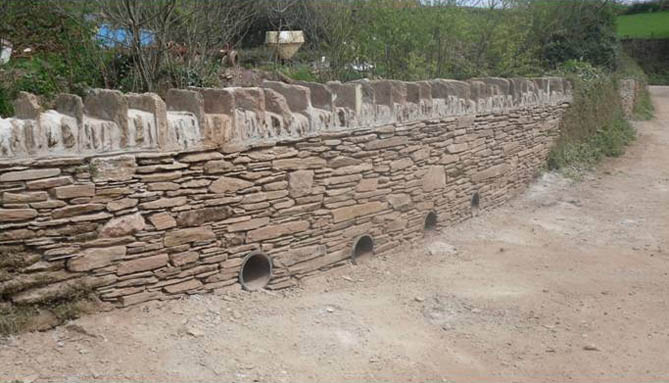 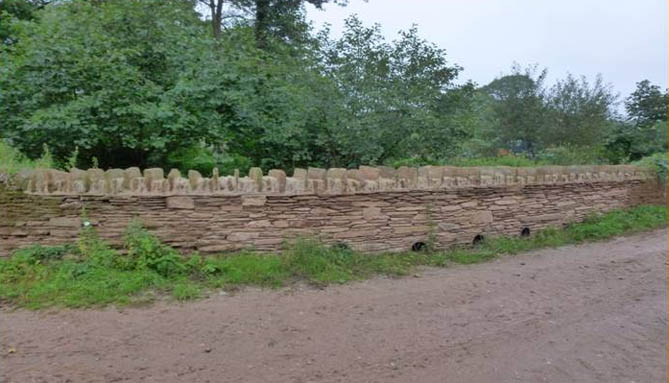 In total three in number sections of wall had to be rebuilt. 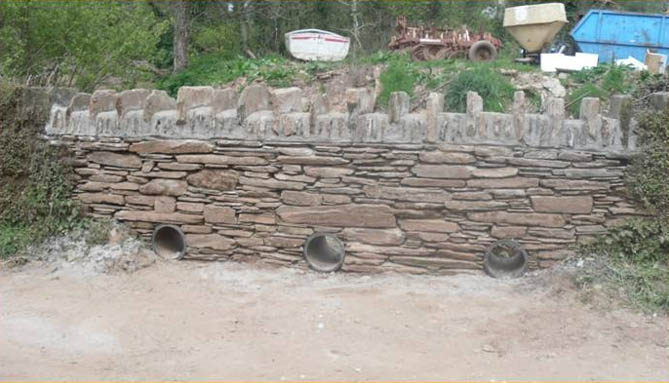 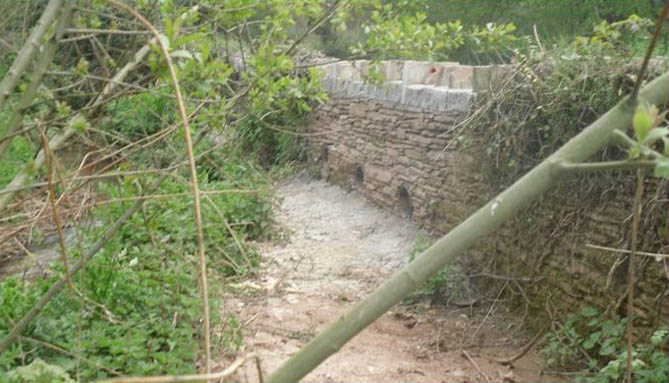 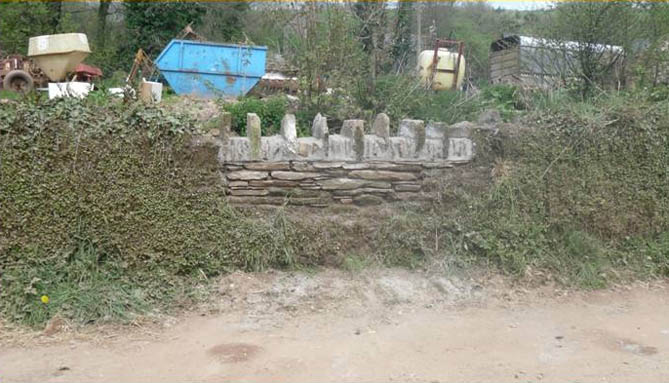 Other works we have been involved in here have consisted of constructing a new retaining wall on site, and also repairs to the walls on the Root House.