Prawle Point is the most Southern extremity in Devon. Overlooking the English Channel between Start Point to the East and Bolt Head to the West, the high cliffs here have served as a vantage point since ancient times. ‘Prawle’ is the Anglo-Saxon word for ‘Lookout’. In medieval times it is likely that a chapel dedicated to St. Brendan stood on the site of the present ‘Lookout’ and later, during the Napoleonic Wars, an Admiralty Signal Station was in operation close by. The nearby village of East Prawle in the parish of Chivelstone is mentioned in the Doomsday Book. Initially a farming settlement, it has seen very little change over the centuries. 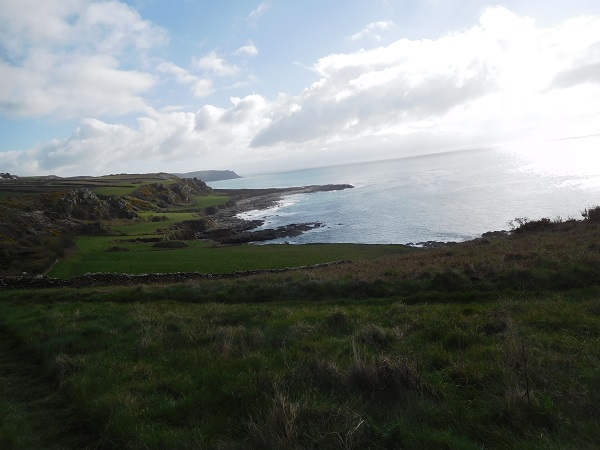 Originally built by Lloyds of London as a signal station in the early 1900’s there are also nine small brick built cottages along with the Station Master’s house. Later the station and cottages were taken over by the Admiralty to accommodate the coastguard service and their families. Although the signal station was vacated in the 1970’s by the coastguard service, today it is manned and maintained 365 days a year by the National Coastwatch Institution (N.C.I.) comprising of a team of 60 fully trained volunteers. In 1994 the Admiralty sold the cottages and they are now either privately owned or used as holiday lets. 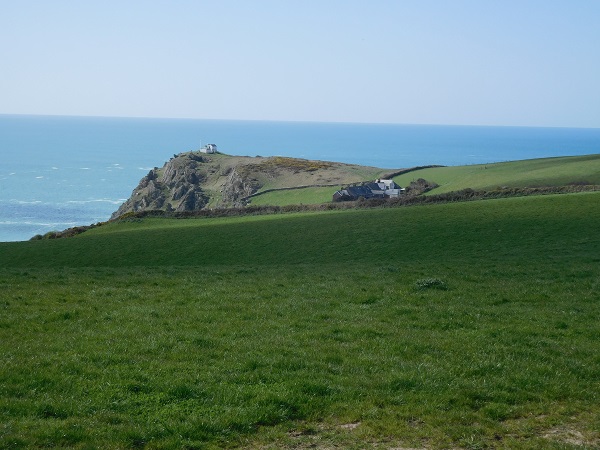 We have carried out other work at this location before which involved the building of a boundary wall between two of the properties in re-claimed bricks. This time however, we were asked to re-build a section of wall at the entrance leading up to the Coastguard Cottages. 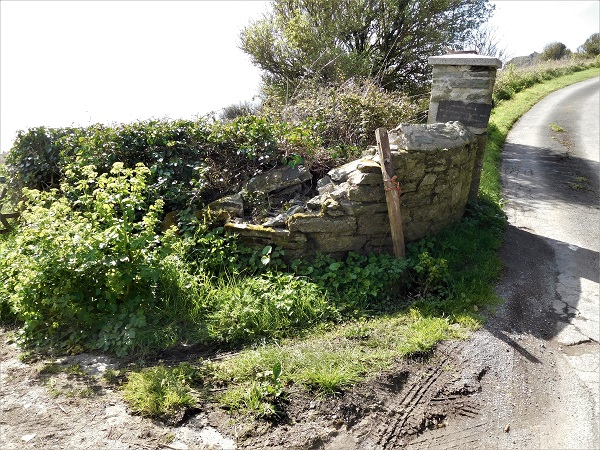 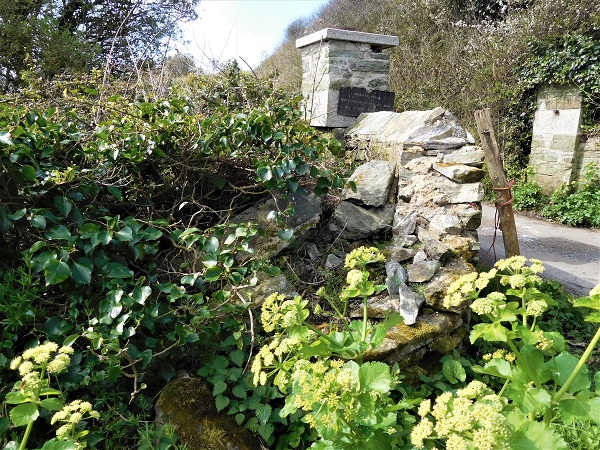 The entrance wall had previously been hit by a vehicle many years ago and then just left for Mother Nature and the elements to take over. 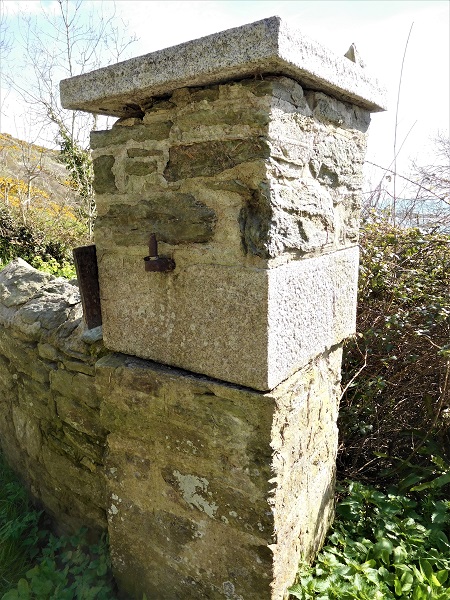 The pillar had also been hit leaving its position slightly twisted and out of upright. 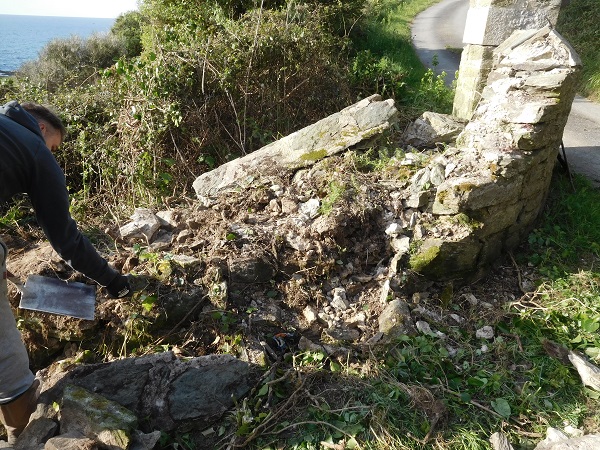 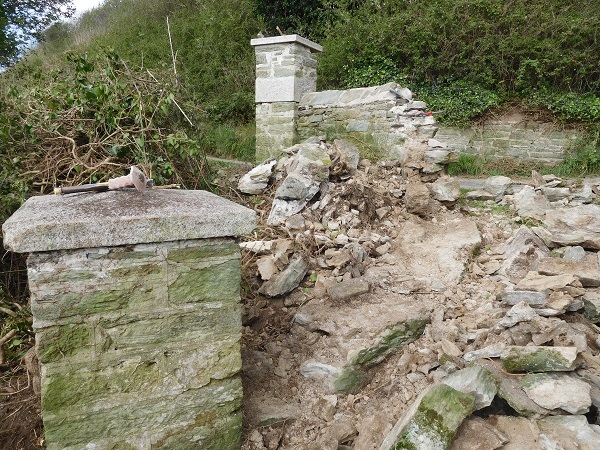 Our first task was to remove all the vegetation that had grown wild to reveal the original stone that we were going to re-use to build it all back together again. 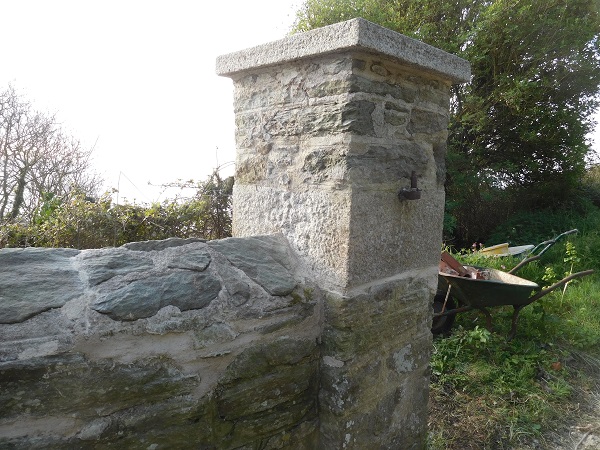 The wall had originally been constructed using local slate with granite capping stones on top of the pillars. After clearing away all the vegetation we set the pillar back into its original position and this was then pointed in using traditional lime mortar. 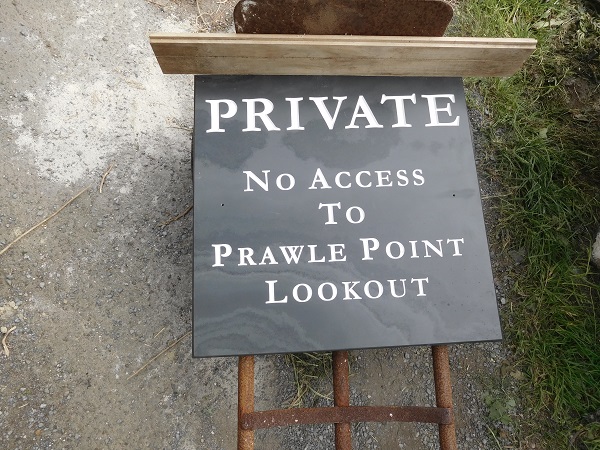 The client had a slate name plaque made and wanted this set into the wall. 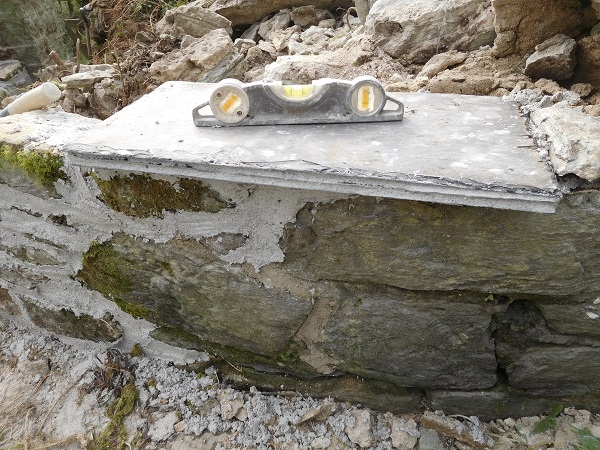 We formed a new sill consisting of three courses of natural slate and created a recess for the new plaque to go in. 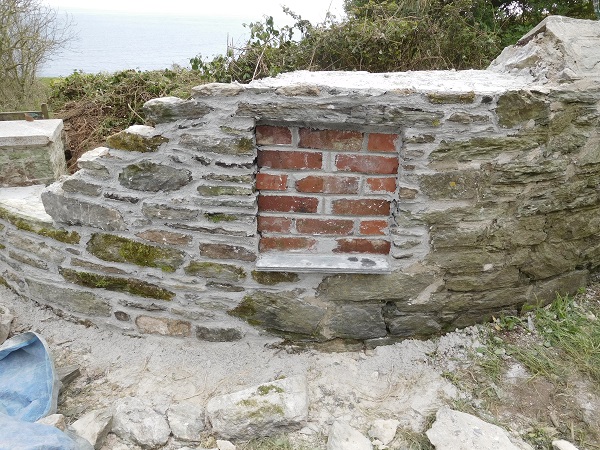 The wall itself had been built on a curve and also sloped down to meet another pillar. 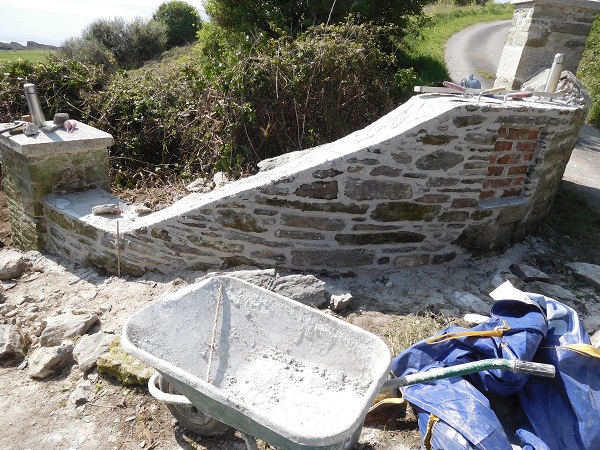 We followed the original curve of the wall and got the levels up in preparation for the coping. 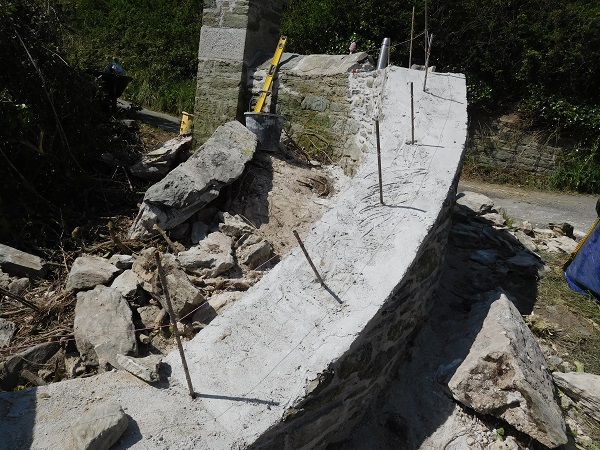 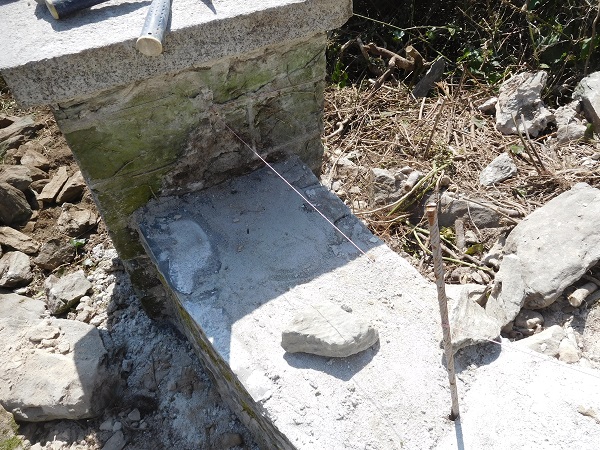 The coping was apex style and in order to form this on a sloping curve, we set in pins with a line attached to give us the top edge of the coping. 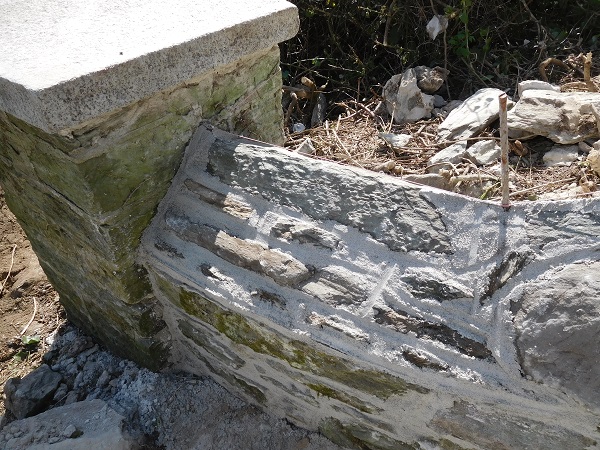 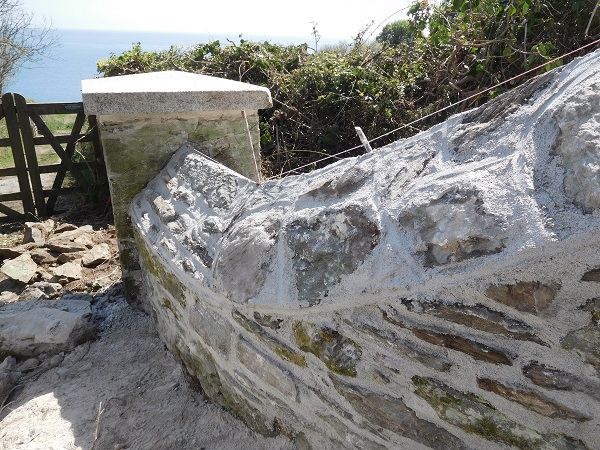 And following the line is by far the simplest and easiest way to form this detail to any great accuracy. 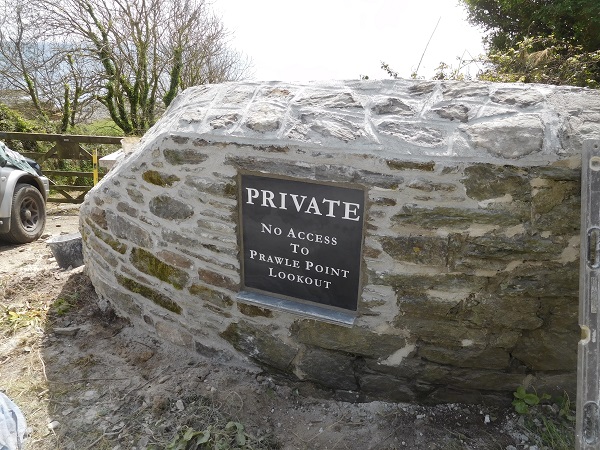 Once the coping had been completed the pins were pulled out and we set the new slate plaque in position into the wall. All work was carried out using lime mortar. 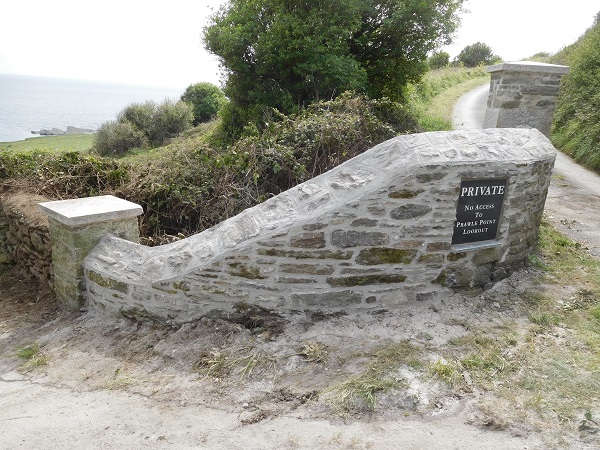 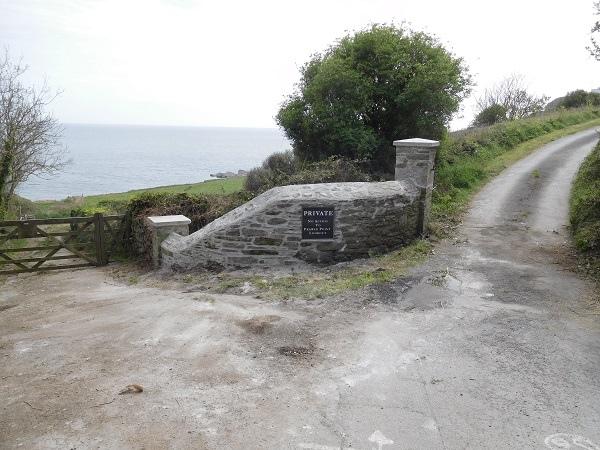 The wall between the gate and the lower pillar was in a bad state of repair too. This wall was a drystone wall and part of this was taken down and rebuilt using the same stone, although we did use lime mortar in its core to give it added strength. 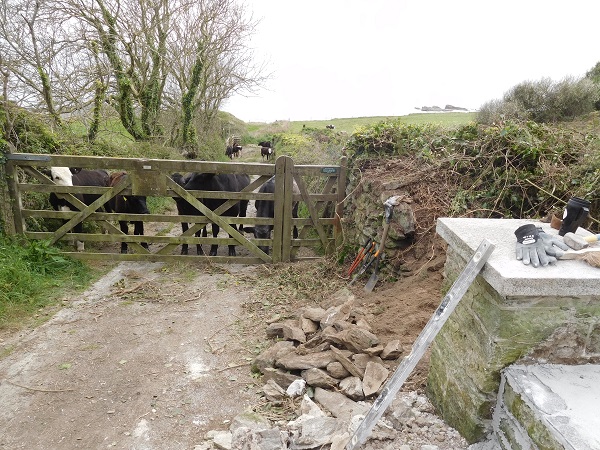 Even the local cows were interested in what we were doing. 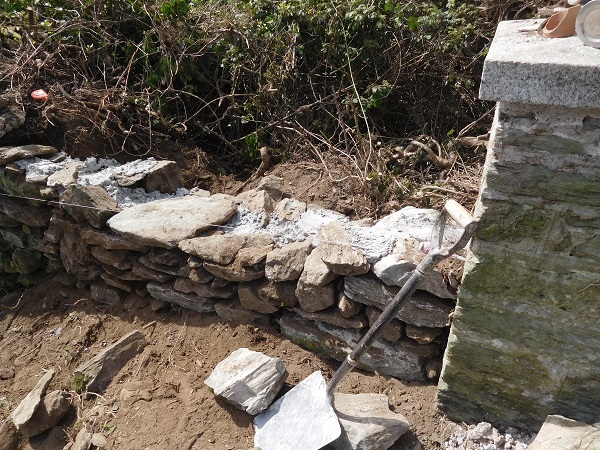 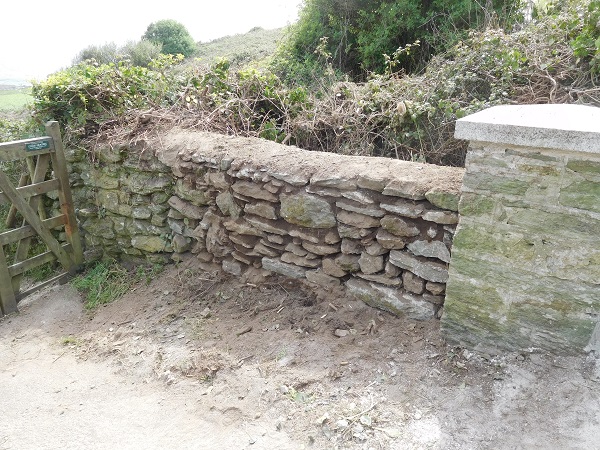 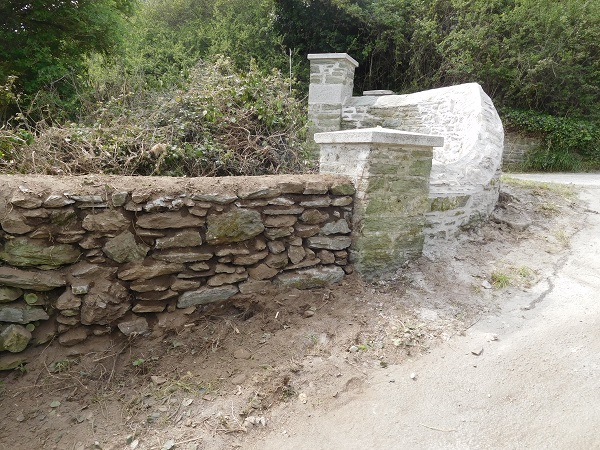 The plaque was set into the wall to deter ramblers and tourists from walking up the driveway thinking it was part of the coast path. But go through the gate and follow the coast path signs, you’ll see some spectacular views along this stretch of coastline. 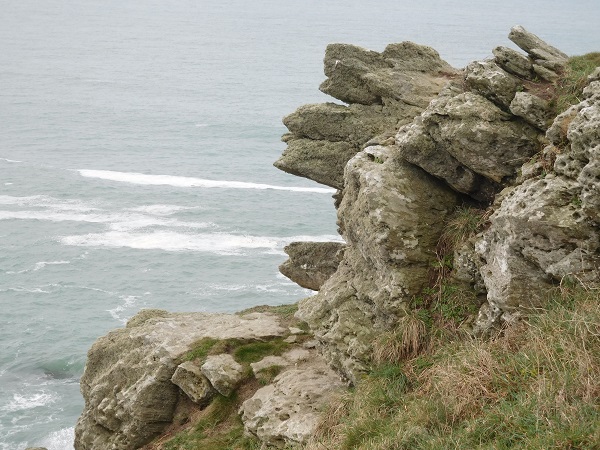 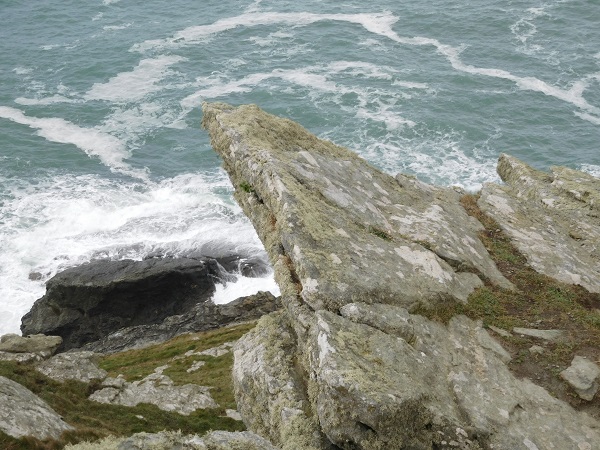 On the coast path you will encounter lines of standing stones on the edge of the cliffs. 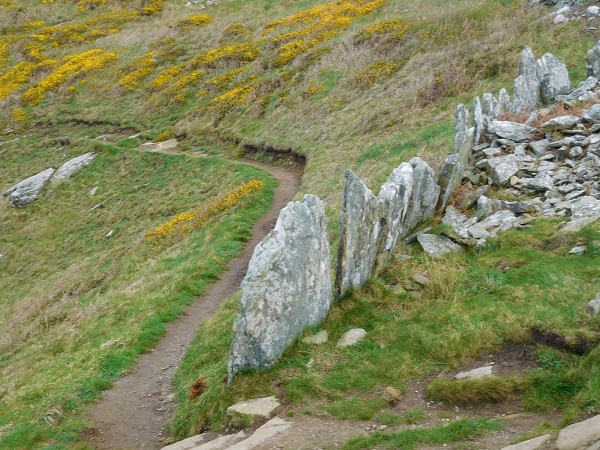 These ancient stones are called ‘orthostats’ and were placed here by Bronze age man about 4200 years ago. An orthostat is a large stone with a more or less slab-like shape that has been artificially set upright and the word comes from the Greek meaning ‘straight – standing’. 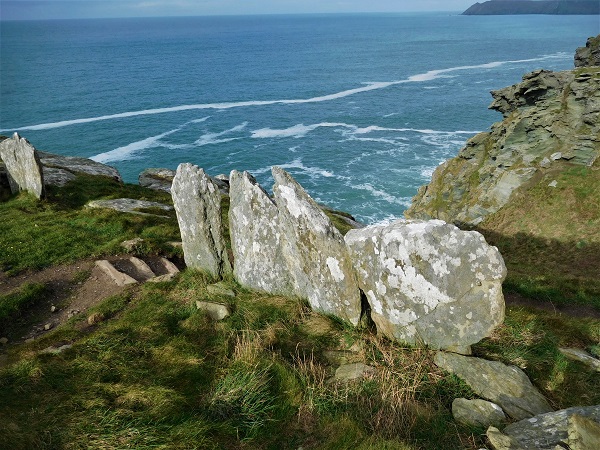 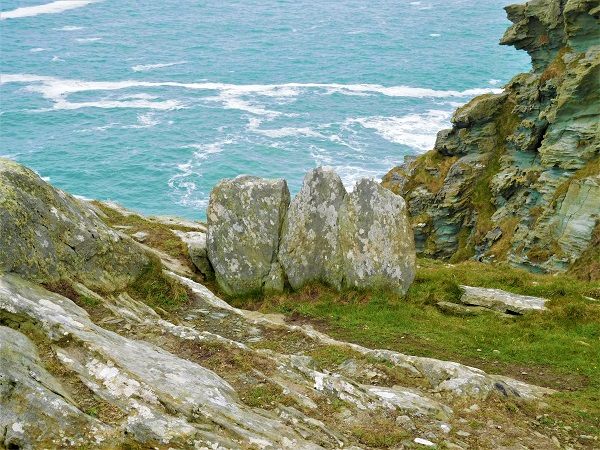 Composed of mica schist, a local metamorphic stone, these three to four feet high stone slabs were placed upright next to each other to form the boundaries of what is called a ‘coaxial field system’ used for farming. These fields are typically small and rectangular in shape and form a system in which the boundaries of the adjacent fields make a series of long, rough parallel lines and these field systems were used well into the Middle ages. This type of boundary built by ancient man are probably amongst the oldest walls you’ll find anywhere in the British Isles, and most if not all, are classified as Scheduled Ancient Monuments by English Heritage.