Plympton House is situated in the parish of Plympton St. Maurice, Devon. It is a grand Grade I listed country house, in the ‘William and Mary’ tradition, near St. Maurice’s Church in Plympton, commenced by Sir George I Treby (1643–1700) and completed around 1715–20 by his son George II Treby (1684–1742). The architect is unknown, however accounts in 1720 refer to William Veale as the stonemason. The house has had three main uses in its 300 year history. Firstly a family home, secondly an asylum and thirdly a residential care home set up by The Sister’s of St. Augustine and re-naming the house St. Peter’s Convent. Having been disused for several years, in 2016 a new plan was announced to bring the estate back into regular use with a sensitive redevelopment plan, creating a community of several homes across the grounds and reverting the house itself back to private residential use. 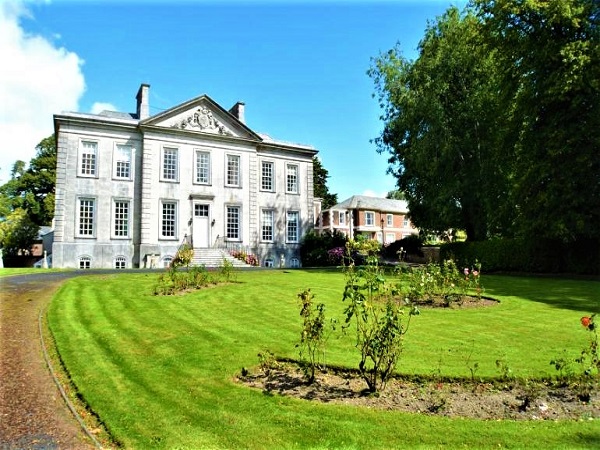 We were contacted by the new owners to look at the pillars and gates entering the grounds which formed part of the North boundary wall. This grand entrance formed the carriageway leading up to the front of the house. The walls and entrance pillars consist of two sets of Portland stone pillars that are joined together by curved brick walls which ramp up from the outer set of pillars to the inner gated pillars. The brickwork has been built using a bond known as ‘Flemish’ bond, a decorative bond of brickwork used for garden walls. The walls and entrance are Grade II listed. 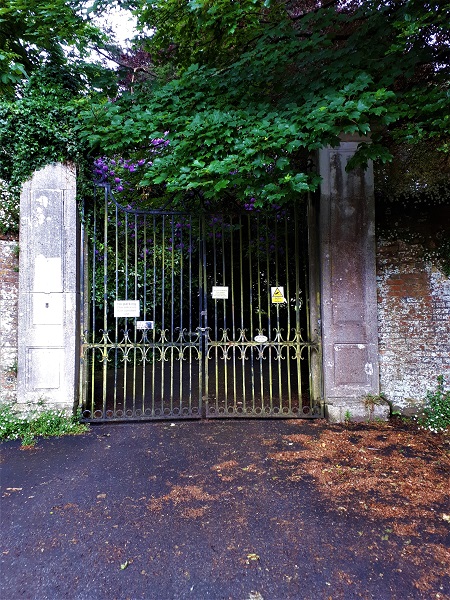 The left hand pillar had at some time been hit by a vehicle. Although the pillar was still standing, it had moved slightly and the heavy iron gate itself had buckled which made it difficult to open and close properly. Also it was evident that some of the Portland stone sections that made up the pillar had been pushed out of their original positions along with cracks that had formed within its joints. 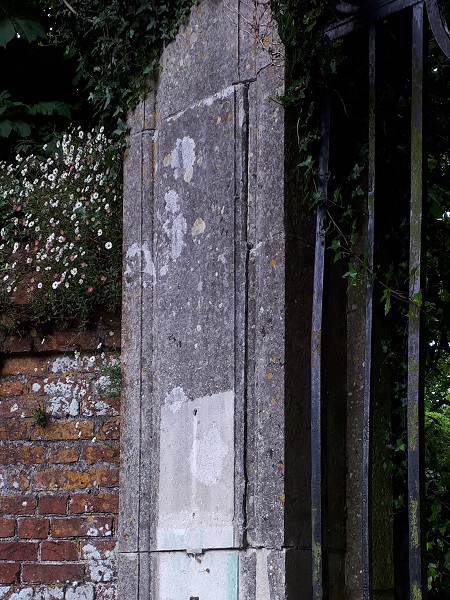 To get the gates to shut properly again it meant that first the gates had to be straightened and the pillar in question would have to be taken down and then be re-built upright. Another option was to leave the pillar as it was, take off the gates and fix them to new steel posts behind the pillars. The original stone pillar could then be stabilized with pins and any cracked jointing be re-pointed. With the heavy gates now positioned on new steel posts, no stress would be placed on the pillars. Also being the more economical way of carrying out the work it was agreed that this option was the way forward. 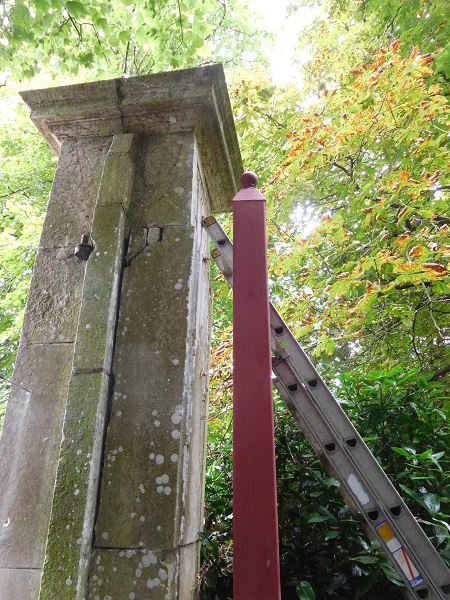 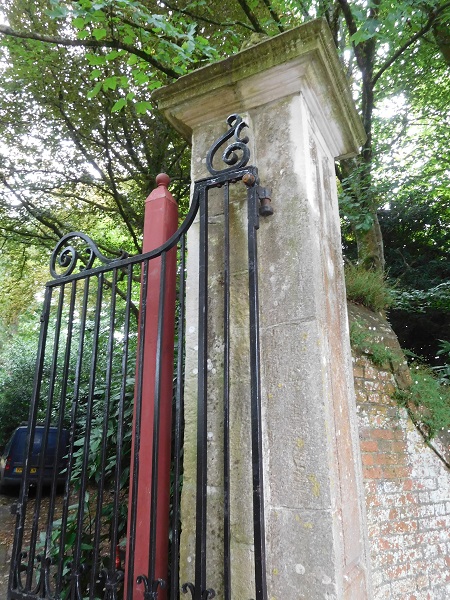 First of all the gate on the damaged pillar was removed and taken away to be straightened. New the steel posts were then set in place behind each pillar. 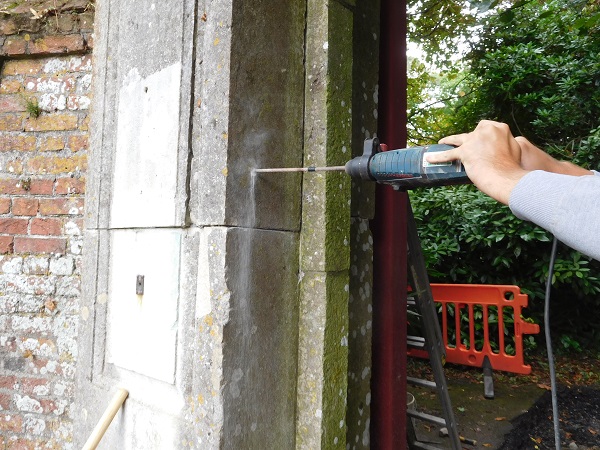 We drilled a couple of holes into one of the displaced sections of Portland stone and resin fixed some stainless steel dowels in place. This would help stabilize the pillar and prevent any future movement. All loose and cracked jointing was raked out and re-pointed using a Portland stone lime based repair mortar. 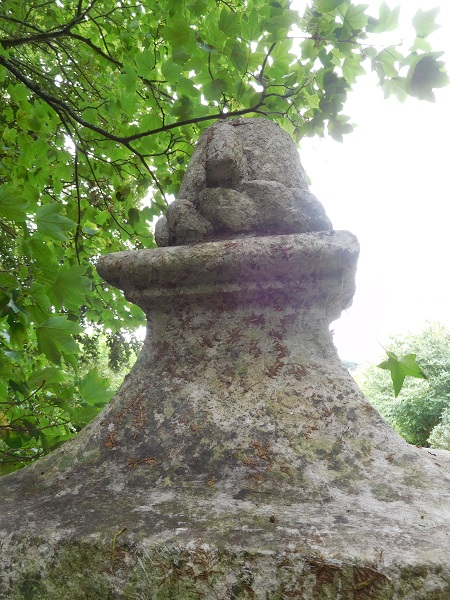 The tops of the gate pillars were cleaned of all vegetation. Originally on each of the four pillars sat a stone heraldic beast. Unfortunately two of these are missing, having been lost, stolen or damaged at some point in time. 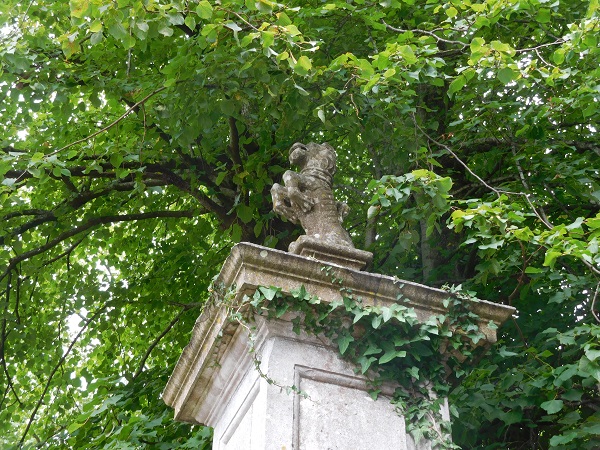 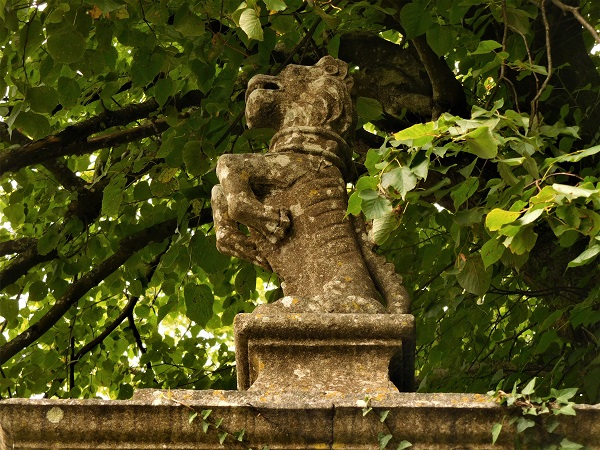 However, they still exist on the two outer pillars. Carved from Portland stone these beasts are collared lions and feature in the Treby coat of arms. 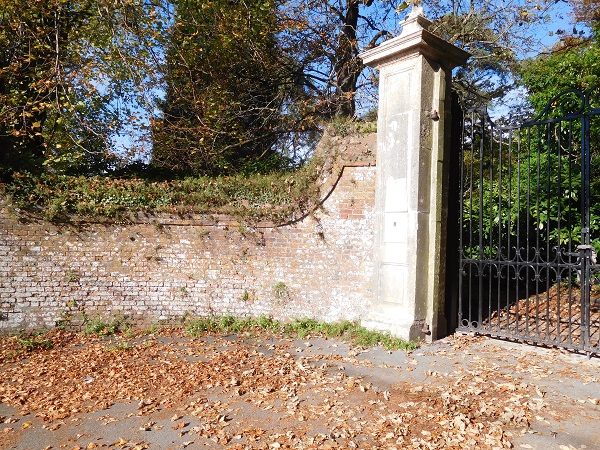 Once all the repair work had been completed to the pillars, the refurbished gates were brought back on site and hung from the new steel posts. An electric motorised armature was fitted so the they could be opened by remote control.