During the Victorian era it had been suggested by local historians that this cottage situated in Saltash Passage was the family home of Mary Newman where she grew up before she married Sir Francis Drake. Conflicting historical records makes this seem unlikely. However, over the years, the story became part of local folklore and is now synonymous with one of the world’s most famous sea captains and his first wife. Whether it was or whether it wasn’t her home, this old cottage dates back to around 1480 and is the oldest building in Saltash. It is Grade II listed by English Heritage. 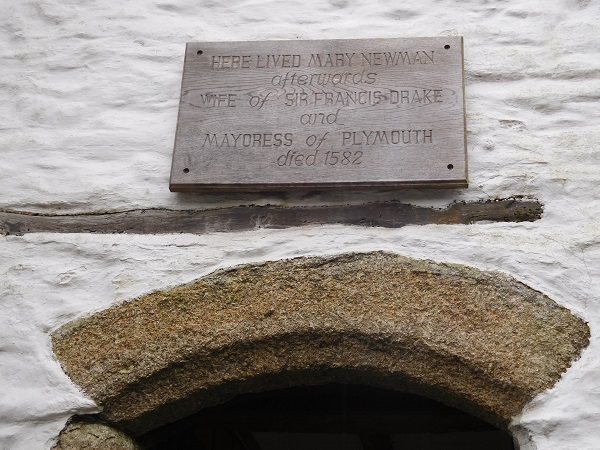 One of the chimneys on the cottage had been causing long term damp problems that was affecting the internal walls below. A scaffold was erected and we were called in by the main contractor, Penquite Construction, to rebuild the chimney. 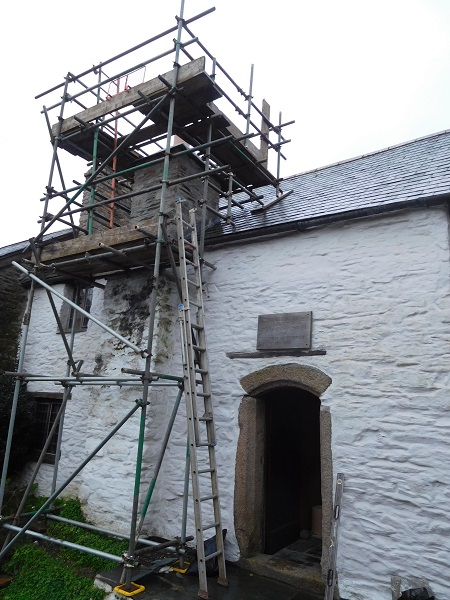 The stack had already been demolished and a new lead tray apron fitted in preparation for us to start building. We set in the first clay liner for the flue and began to build up the chimney stack. These type of flue liners should only be built in one way. The top and bottom edges of the liner are cast so they lock into each other. Always make sure that the highest edge of the rebate is on the top outermost point of the flue as you place them together. This ensures that any tar residue that builds up on the walls of the flue can’t seep out through the masonry of the chimney stack creating unsightly staining. In this case it was unlikely that a fire would be lit in the fireplace below. But that wasn’t to say there might be sometime in the future. Another very important factor to remember is to dress the lead tray about one inch (25mm) up the inside of the first flue that sits on the tray and sealed with an intumescent sealant. The sealant makes sure tar can’t seep out onto the tray, but more importantly, by dressing the lead up in this way, any water penetration through the external masonry will not track along the lead tray and down the flue causing damp problems inside. 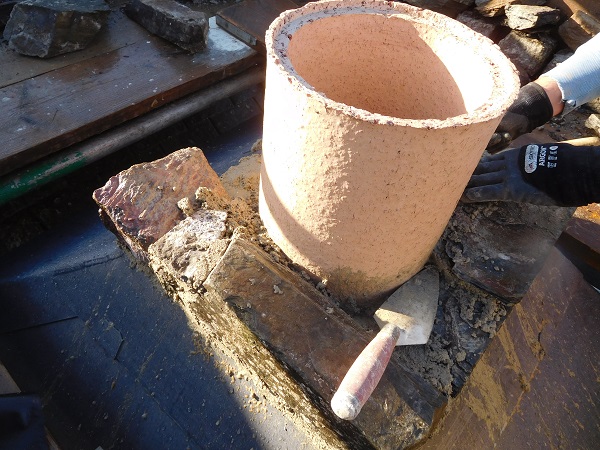 Although not the original stack, the one that had been demolished was most likely built sometime during the last thirty years or so. Nevertheless, being a listed building it had to go back the same, so all the original stone from the demolition was used again. The stone was a mixture consisting of slate, granite and limestone. We also had photographic records of the stack before it was taken down so we could replicate it. 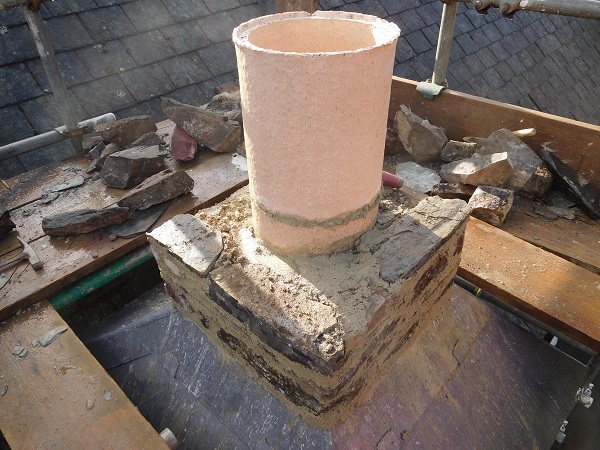 The stack was eighteen inches square (450mm) and we used three in number flue liners to give a total height of three feet (900mm) and a traditional lime mortar was used to construct it. 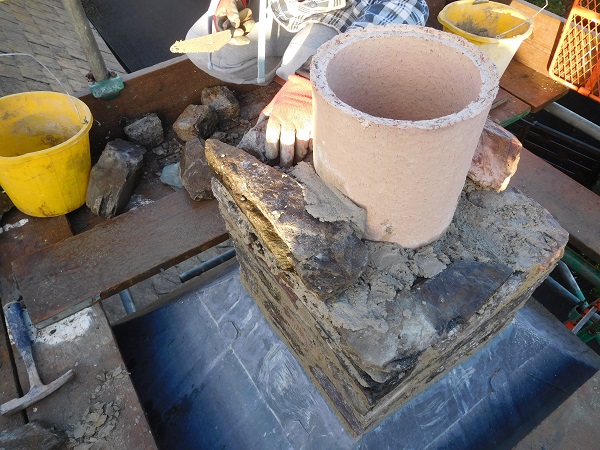 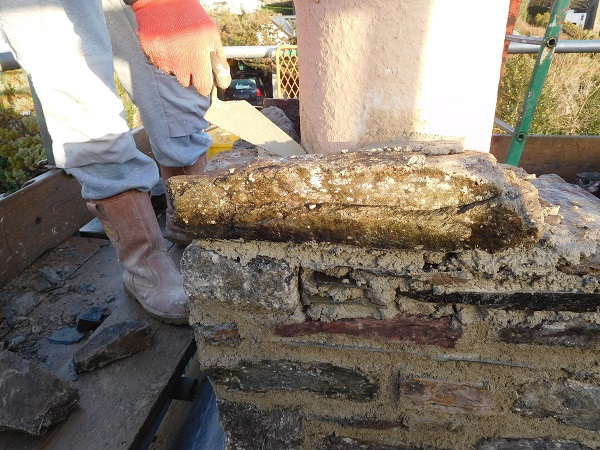 When almost up to the top, we set in a course of natural slate. 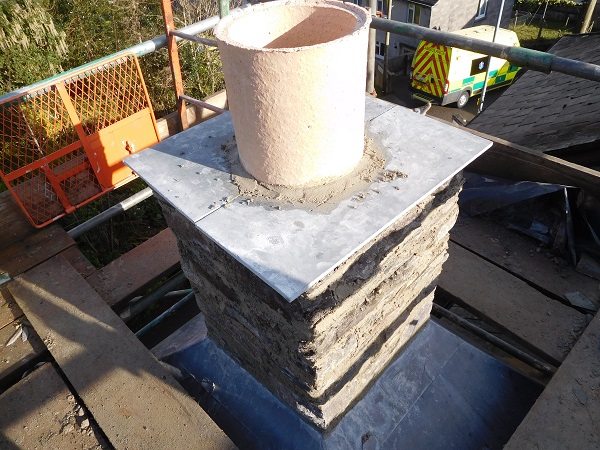 This would enable us to form a corbel and was shown on the original photographs. 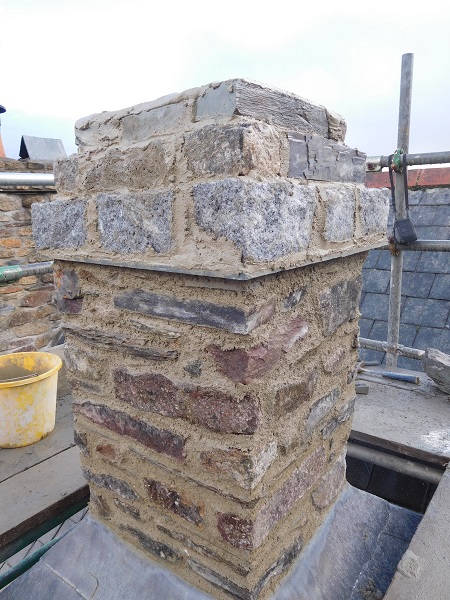 This was then stepped back in three courses until we reached the top. 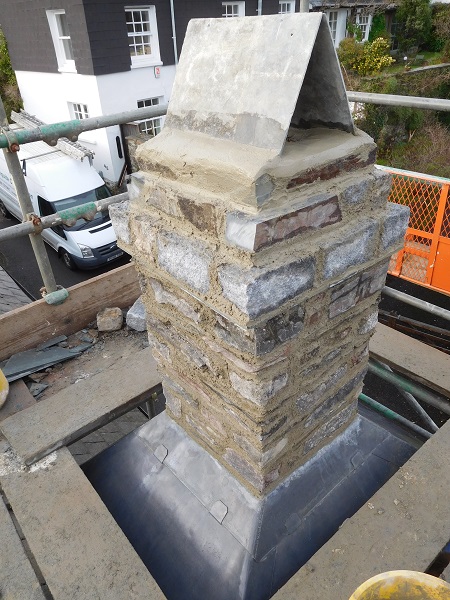 On completion two roofing slates were set on top to form a cowl and then flaunched in. 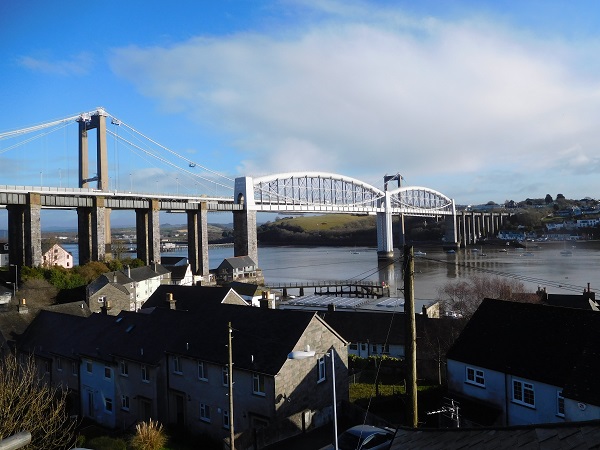 Being high up on a scaffold gave us a good vantage point across Saltash Passage towards Brunel’s ‘Albert Bridge’ which was built in 1859 and this opened up the railway network into Cornwall. 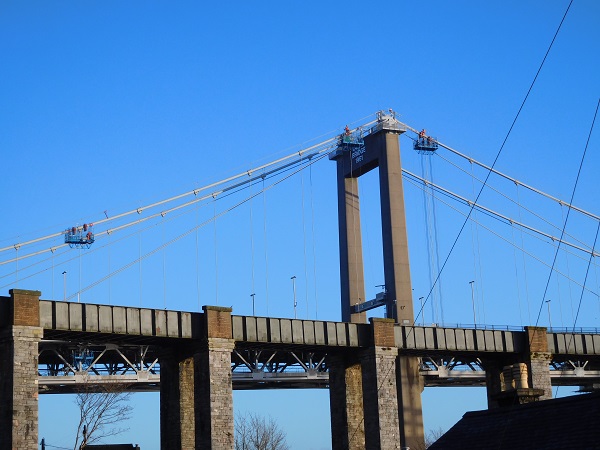 And as high up as we were, there were guys working even higher than us. These guys were carrying out maintenance work on the Tamar toll bridge next to Brunels. 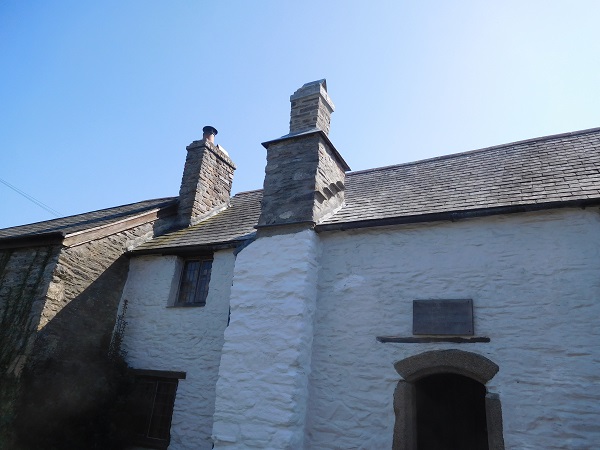 A stepped slate flashing was set into the sides of the stack, this would help shed water away from the lead flashings of the roof underneath. The stonework to the lower section of the chimney on the elevation was then painted before the scaffolding was stripped. 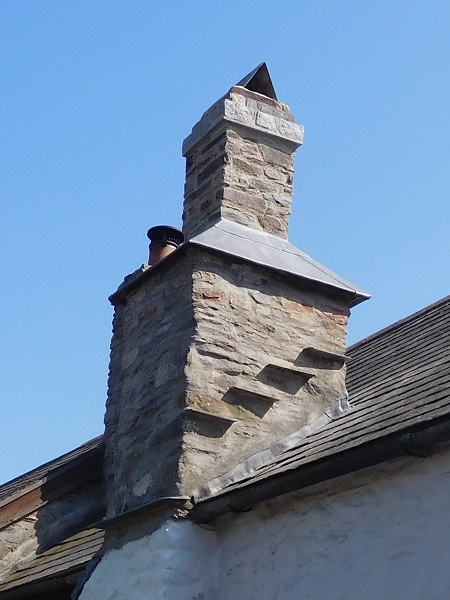 Today the cottage is a museum. It is managed by the Tamar Protection Society detailing life in the Elizabethan period. With authentic Elizabethan gardens at the rear, furniture and items within are on loan from private collections and the Victoria and Albert Museum in London.