Originally, Newnham was called ‘Niweham’ and it is first recorded as a settlement in 1292. By 1325 it was known by its more modern pronounciation of ‘Niwenham’, meaning ‘new ham’ or ‘new pastures’. It is situated in the parish of Plympton St. Mary. Although the lands here may of been owned by the Priory at Plympton, they were not in control of the property, and the property was certainly independant of the Priory by the 15th century when it came into the hands of the Strode family. The wealthy Strode family were MPs for Plympton and other duties included Sheriff of Devon. The property at ‘Old Newnham’ was the family seat up until the early 1700’s when the Strodes built their new residence at ‘Loughtor’ which they renamed ‘Newnham Park’ sometime during the 1740’s within the Medieval deer park, a short distance to the north. Today this house is known as Newnham House and consists of almost 1600 acres. 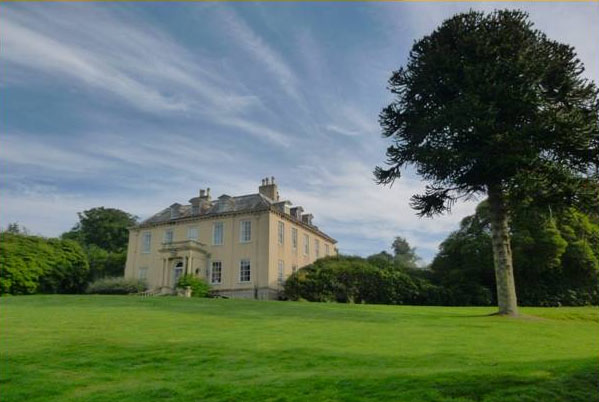 Historically, deer parks were areas of land which were generally enclosed and set aside, with their sole purpose being for the management and hunting of deer and other animals. They were usually located in open countryside on marginal tracts of land or adjacent to a castle, palace or manor house. The deer park at Newnham was first laid out around 1700 to compliment the new house which the Strode family were to have built here and the new deer park in part included a post Medieval deer park with its associated rabbit warren. Deer parks varied in size generally ranging from anything between 3 hectares up to 1600 hectares. These parks often included features such as a hunting lodge, a game keeper’s cottage and fish ponds. The whole park would usually be surrounded by a ‘Pale’ which is a term for a large fence or a hedged bank with an internal ditch to keep the animals in. At Newnham the deer park covers an area of about 145 hectares which is roughly 360 acres. 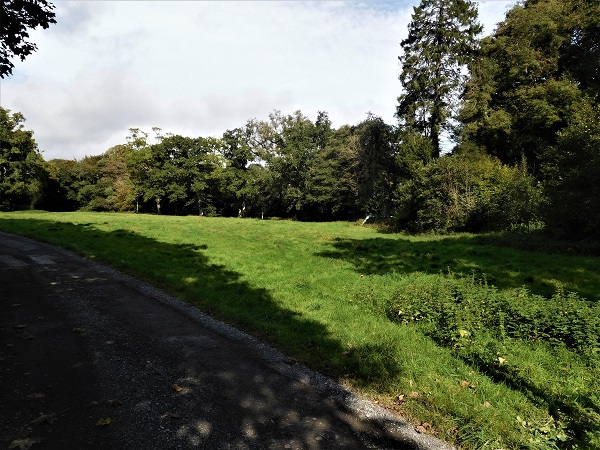 It is generally believed that a small number of deer parks may have been established during the Anglo-Saxon period but it was the Norman nobility’s passion for hunting that led to the majority of these being constructed, mainly between the years 1200 and 1350. From the 15th century onwards few parks were constructed and by the end of the 17th century the deer park in its original form had largely fell into decline. They were established in almost every county in England and it is not known exactly how many deer parks were originally constructed but their numbers more than likely exceeded 3000. Many of these survive to this day, although some are altered to a greater or lesser degree. These days they serve an important insight into the activities of our Medieval ancestors and still maintain a powerful influence on the pattern of our modern landscapes. Where a deer park survives well and is well-documented or associated with other significant remains, its principal features are normally identified as nationally important. Newnham Park is no exception, that is why the park here is designated as a ‘Scheduled Ancient Monument’ by Natural England. 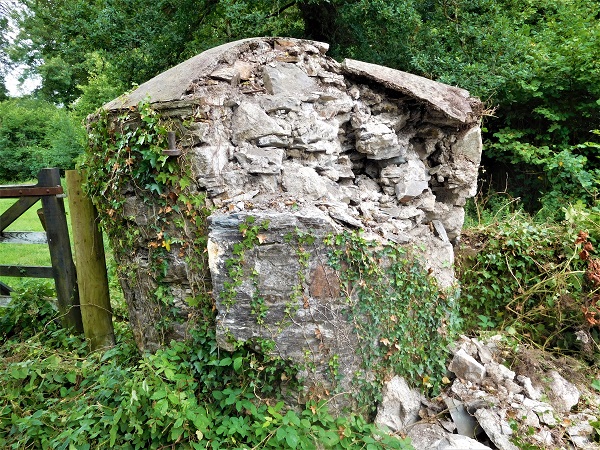 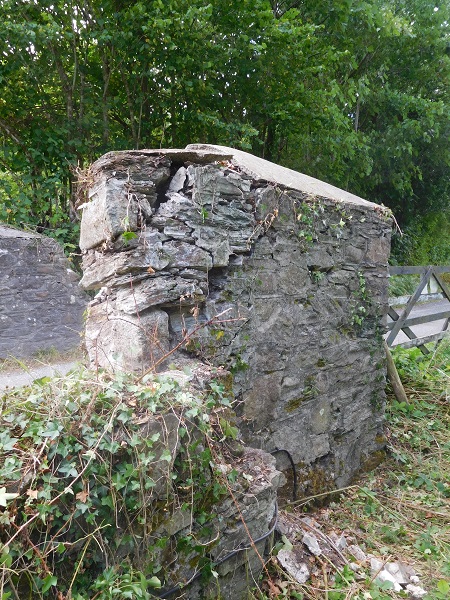 We have previously carried out other works on the Estate repairing both the North and the East walls surrounding the enclosed gardens behind the main house, but this time we were contacted by them to look at one of the entrance pillars leading into the deer park. A vehicle entering the park had hit the pillar causing substantial damage. Because the deer park is a Scheduled Ancient Monument, the pillar forms part of that listing and is also designated as such. Before any re-building work could be carried out, listed planning consent had to be obtained along with written permission from the Secretary of State. These permissions took about eight weeks to come through. However, in the meantime, we were permitted to make the structure safe before permission was granted. First of all photographic records were taken beforehand and then the pillar was taken down to a safe level where it had fractured at it’s base and all the stone was set aside for re-use. And then we waited. 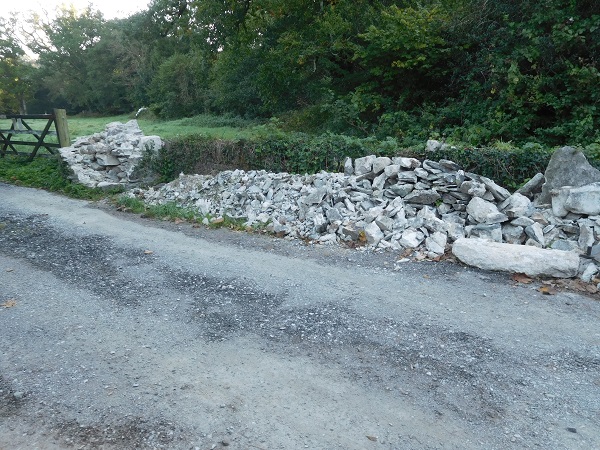 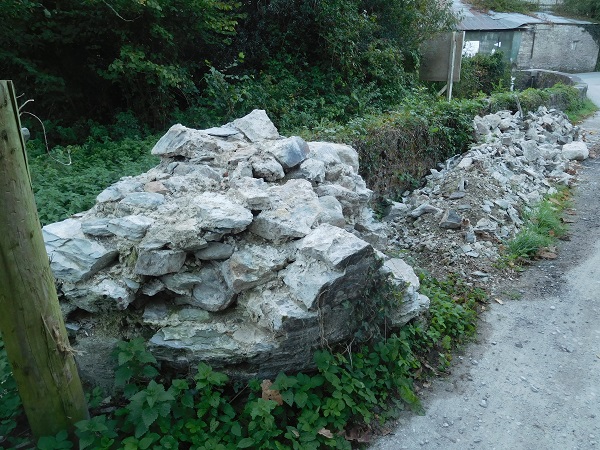 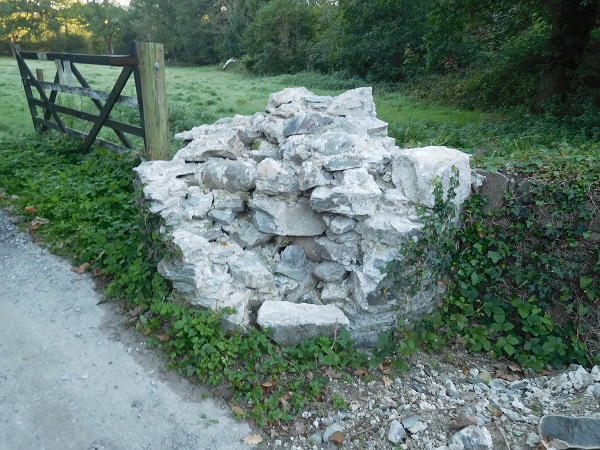 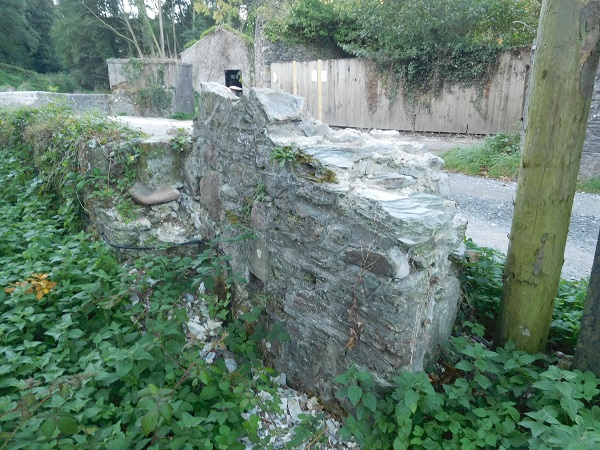 Once all the relevant permissions had been granted we were good to go. The specification from the Secretary of State instructed us to save as much as the original stonework as deemed possible and not excavate below it’s present ground level. We had to use all the existing stone along with a natural lime based mortar to rebuild it, and to make a digital photographic record before, during and after the work had been completed.  The original stone was a mixture consisting of limestone, slate and granite. The pillar itself stood about seven feet high and had been constructed with a concaved face incorporating a ‘Stop’ which stops an inward opening gate to open outwards.  Work soon got underway and we began by building the stone back in place. 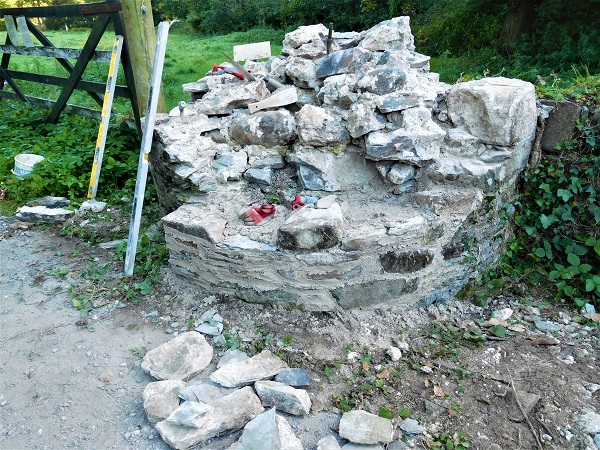 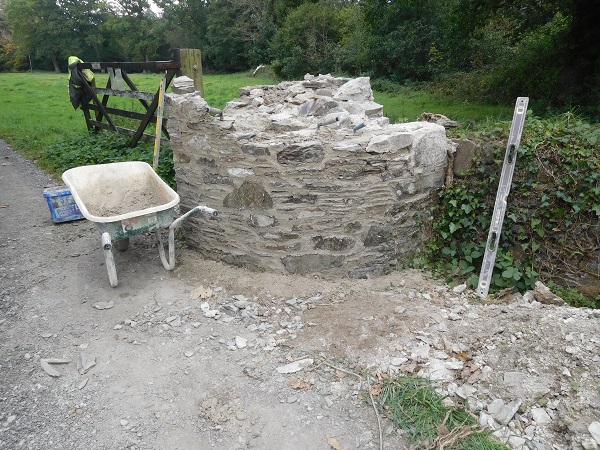 The gate ‘Stop’ was built up as the work proceeded. 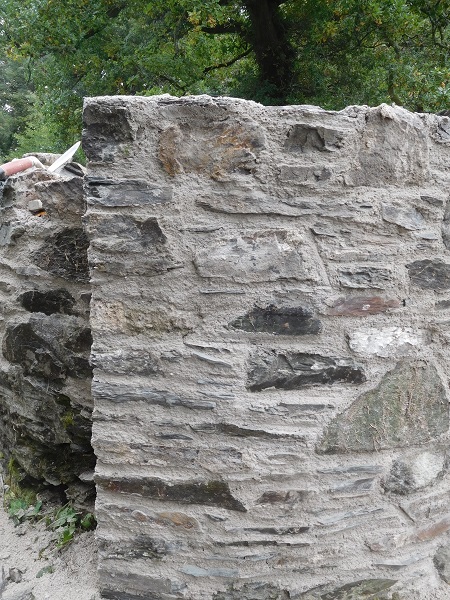 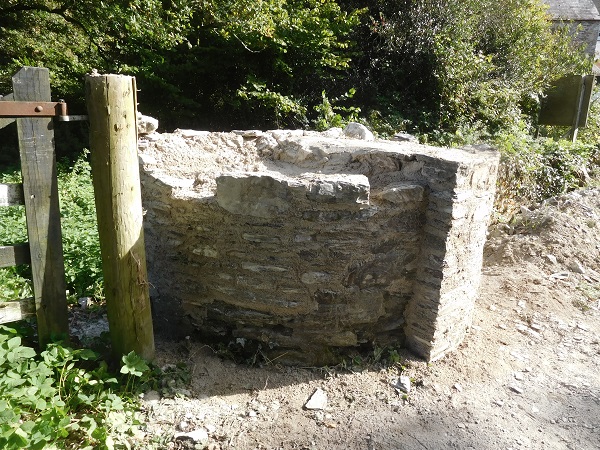 When we were almost up to height we had to make provisions for a granite stone which had a steel gate hanger set into it. This had to go back in the same position as before and the photographic records we took previously helped with this. 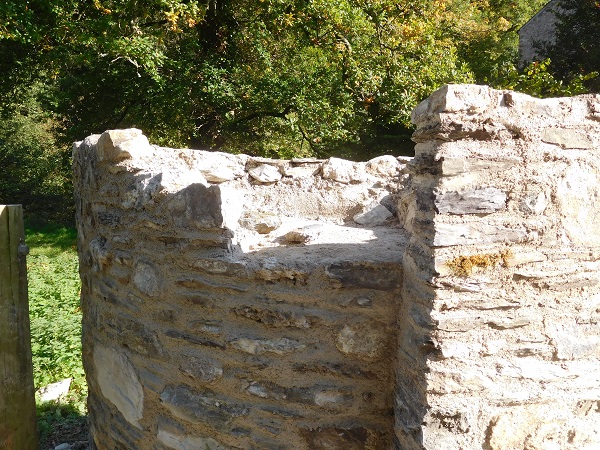 The granite stone in question was fairly large being 40 inches in length and apart from its face from which the gate hanger protruded, all of it would be built into the pillar. 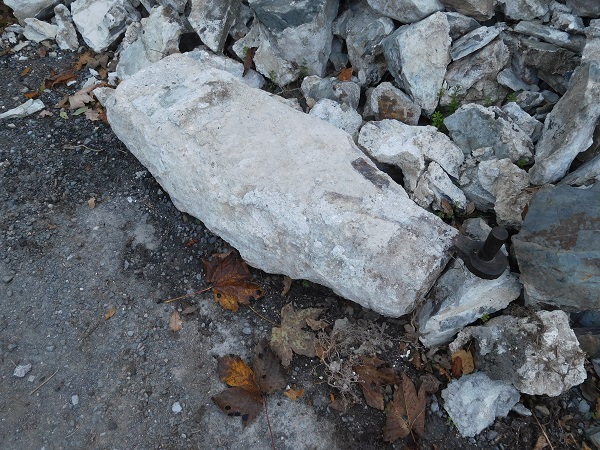 The steel fixing for the gate was set in lead and stones of this size and nature were generally built into stonework to carry the weight of the gate. 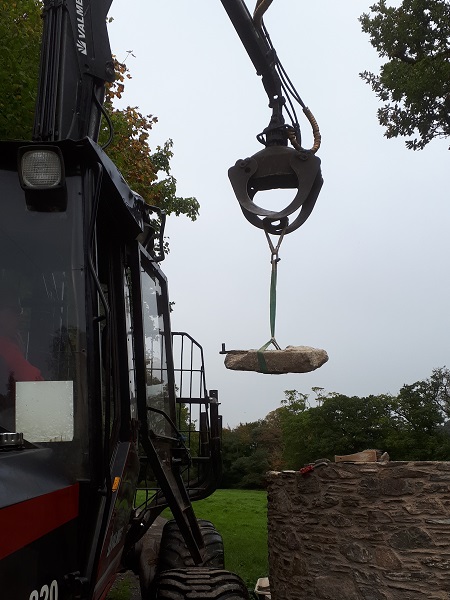 Being quite a lump of stone, it was far too heavy to lift by hand. The Estate has a machine called a ‘Forder’ and this bit of kit is usually put to good use in the woodlands here lifting and moving huge tree logs around. Luckily for us it had a crane and this makes life so much easier and was used to lift this stone into place. 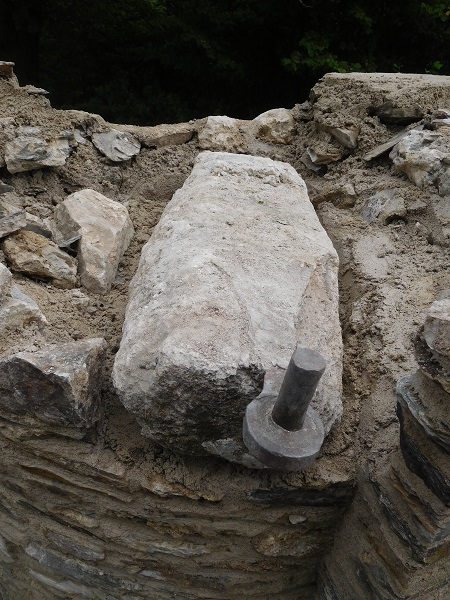 Part of the stone had been broken off when it had been damaged by the vehicle impact. Once in place epoxy resin was applied. 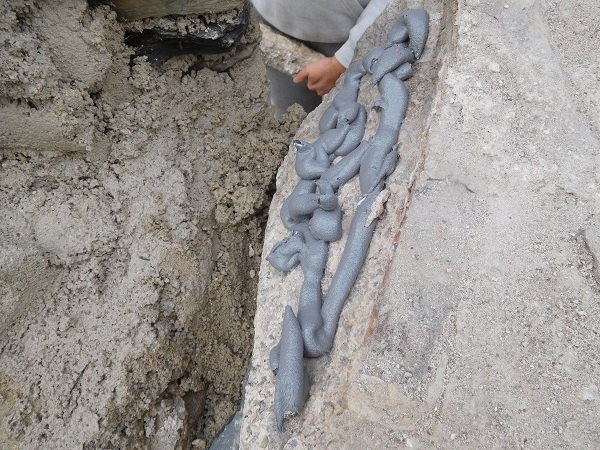 And then the broken section was glued back together. 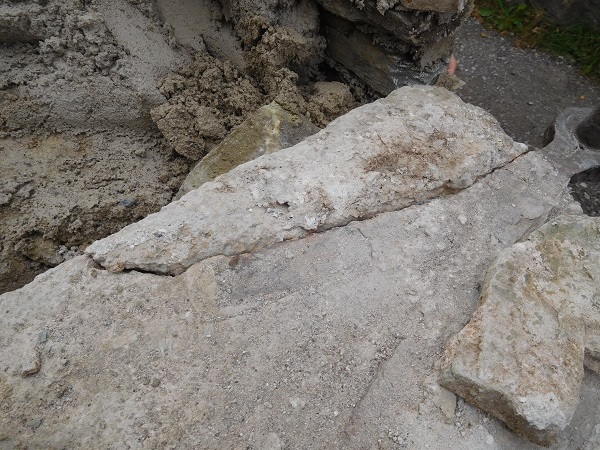 Now that the gate stone was in, we could bring the pillar up to its original height. A laser level was used to determine this by taking a reading from the pillar opposite. 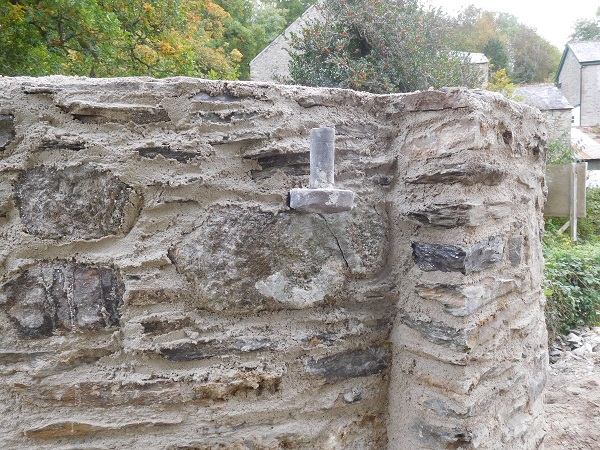 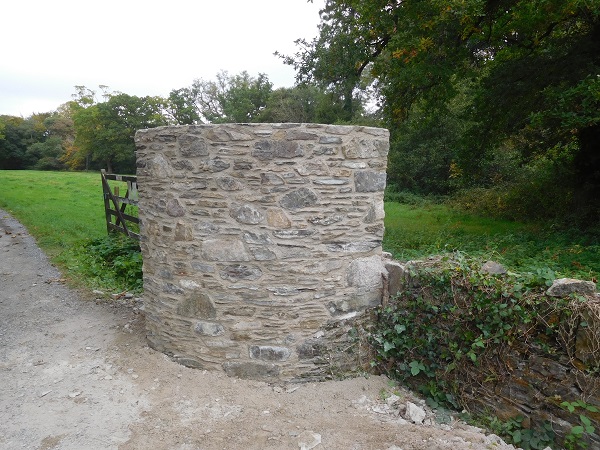 Once the top was up to height we could then concentrate on the capping. A steel pin was set in the centre to determine the finished height and a semi dry screed was laid down to form the apex. 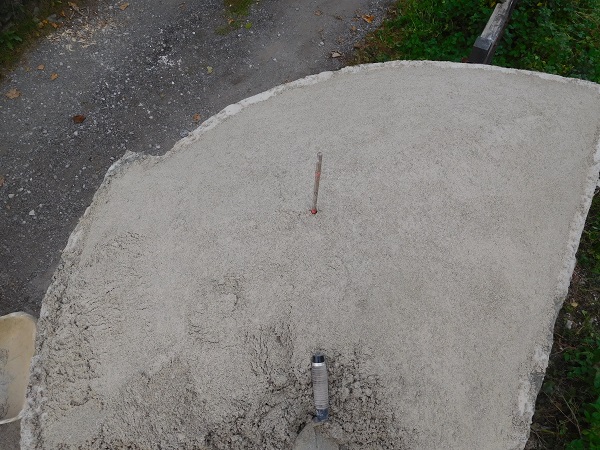 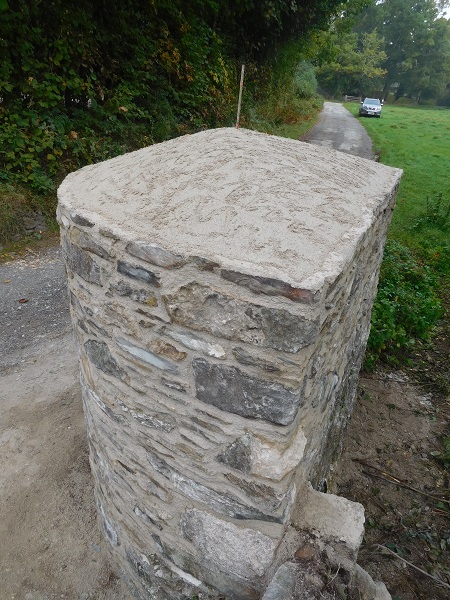 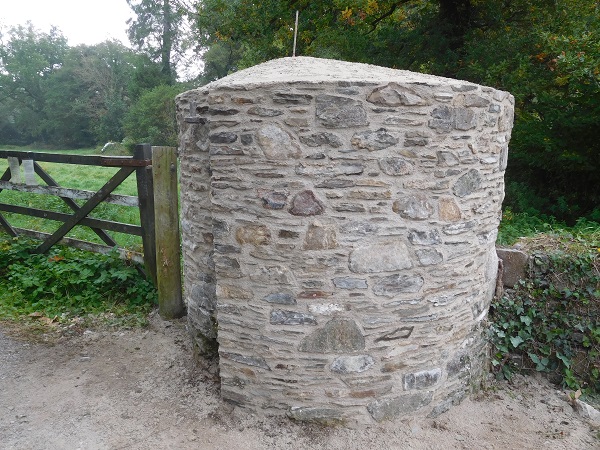 The pin would be removed once the screed had set and the top was left rough in preparation for a final finishing coat. A cement based mortar was used to form this capping to make it more weather resistant. This also matched the capping on the opposite side. 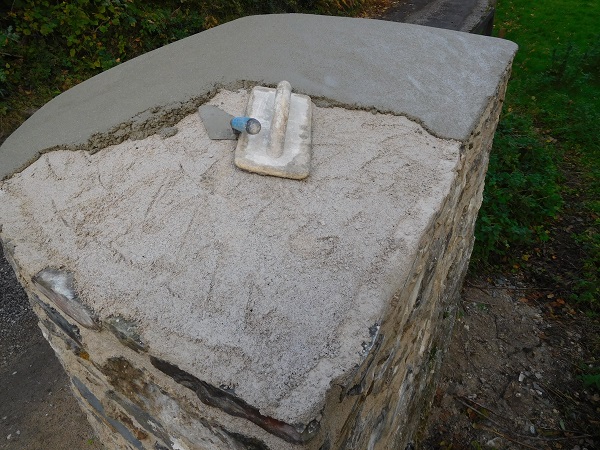 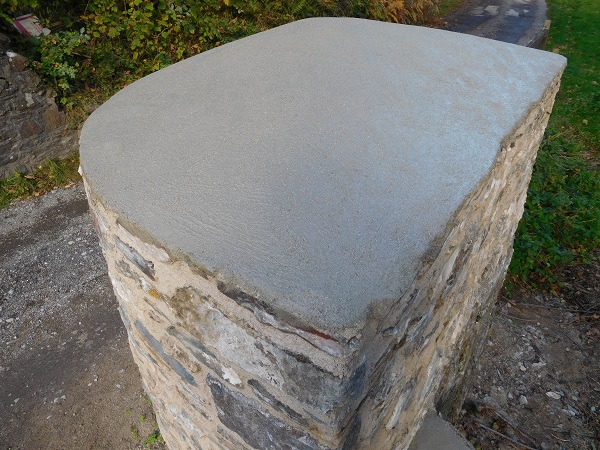 On the back of the pillar, part of the boundary wall which butted up against the pillar had also been damaged when the vehicle had impacted it. This was repaired to match in with the existing stonework using the original stone and lime mortar and finally capped off. 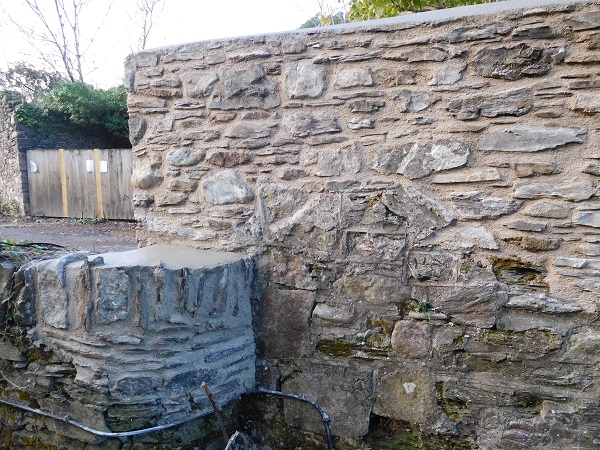 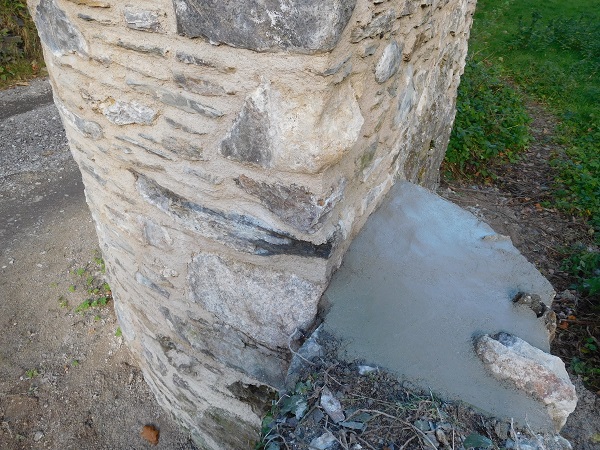 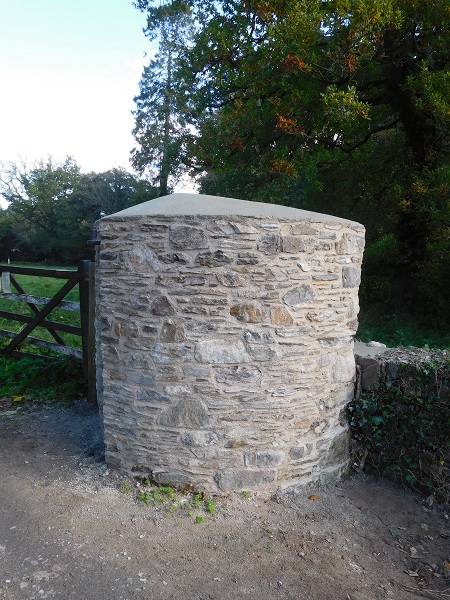 You often still see wild deer wandering around the park and the Estate regularly organizes shoots on the grounds. Not to shoot the deer of course but clay pigeon shooting and if you are interested you can always enquire here www.newnham.co.uk.